COUNTERPOINT: Debunking The Myth Of The Second-Rate Soldier

Ever since the combat exclusion policy was overturned in 2013, the integration of women into combat arms has been met... 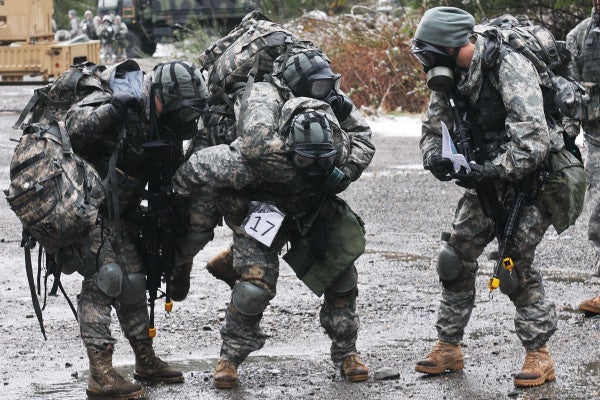 Ever since the combat exclusion policy was overturned in 2013, the integration of women into combat arms has been met with everything from support to uproar. Last week’s article here on Task & Purpose pointed to the deep anxiety surrounding this change, as being cultural, rather than any real physical or mental limitation on the part of women. This resulted in a myriad of comments ranging from the cynical to the ridiculous and all of which pointed to the emotion and misperceptions surrounding this issue.

One thing surprised me, however, and that was how much in common the opponents of this policy have with its advocates who believe it is not only just, but tactically sound. Both want the infantry to be the best it can be; both don’t want to see standards lowered. The concern often arises when buzzwords and phrases like “diversity” and “gender-neutral standards” are used in the discussion as if this equates to the the automatic lowering of standards.

Feminine hygiene was another issue brought up by readers, although an outdated one, as women have been in the field alongside men for days on end and yes, did not shower and urinated wherever they could manage to squat. This is the nature of the battlefield — women who want to join combat arms or combat support for that matter, and think otherwise, I implore you not to join. Lastly, a general negative view of women in the military usually undergirds a lot of the anxiety and sometimes hatred towards women integrating into male-only units.

There is the perception that this policy change is some kind of political agenda to neuter our military men and enforce civilian-style equality in the rank and file. However, this policy of banning women from combat was changed from within our armed services. Some called it a “social experiment,” and maybe that’s an accurate term, but it’s an experiment that was already carried out in the desert and cities of Iraq and the mountains and valleys of Afghanistan. Yet while there is acknowledgement of women in those wars, there is still trepidation over full integration. The military has long been looking to change physical standards to be occupationally specific in order to streamline assigning the best-suited person for the job. This means male/female tankers might not have to run as far as infantrymen in training, but will be required to lift more. This is not lowering standards. If after research and testing it is determined that an infantryman must drag a dummy several yards with gear on, then that will become a gender-neutral occupational standard, and men and women must pass this task. This will not only affect women, but men. There are smaller-than-average men who cannot pass some of these physical requirements, yet would make great soldiers. It takes more than strength to be a good soldier in combat. It takes creativity, quick thinking, endurance, and calmness of mind. Col. Ellen Haring calls this the Audie Murphy Model. Murphy, who was too small for the Marine Corps and passed out in Army basic training, had other skills like agility and calmness under pressure, and became the most decorated soldier in American history. Haring explains, “Fixating on physical standards is a tactical-level approach that misses a strategic-level opportunity.”

Lastly, I think the crux of the issue is a negative connotation of females in the military, something that could be a separate article altogether, but is worth mentioning here. Some readers commented that women are inherently second-rate soldiers and give themselves a bad reputation, followed by anecdotal evidence of a female who couldn’t carry her own weight in a certain task or painted her fingernails too often. Some went as far as claiming that the integration of women will result in more rapes and sexual violence. While I can say that there are good and bad male and female soldiers, the latter argument is not only archaic, but shows once again that we have a cultural problem in our military. As women make up only a small percentage of the armed forces, a male soldier’s interaction with one female usually results in the entire perception of female soldiers.

Some of my best soldiers were men, some of my best leaders and mentors were also men and I consider them my brothers. However, I came across dozens of men who could not follow basic orders, physically couldn’t hack it, or were your run-of-the-mill sexual harasser, yet none of these men tainted my perception to the extent that I suddenly perceived all male soldiers as potential rapists and/or physically weak. Shouldn’t female soldiers be afforded the same? This is so deeply ingrained in the military that it will be years before a significant shift is seen, but integration is part of that shift away from this perception. And yes, I can’t stress enough how important equal standards play in debunking the myth of the “second-rate soldier.”

In a time when our Army is trying to find its relevancy on the next battlefield, changes and adaptations will be expected. This is also a tradition and something our military does after each war. It is reset time. We will need the best of the best for each job, and yes, that will mean women.