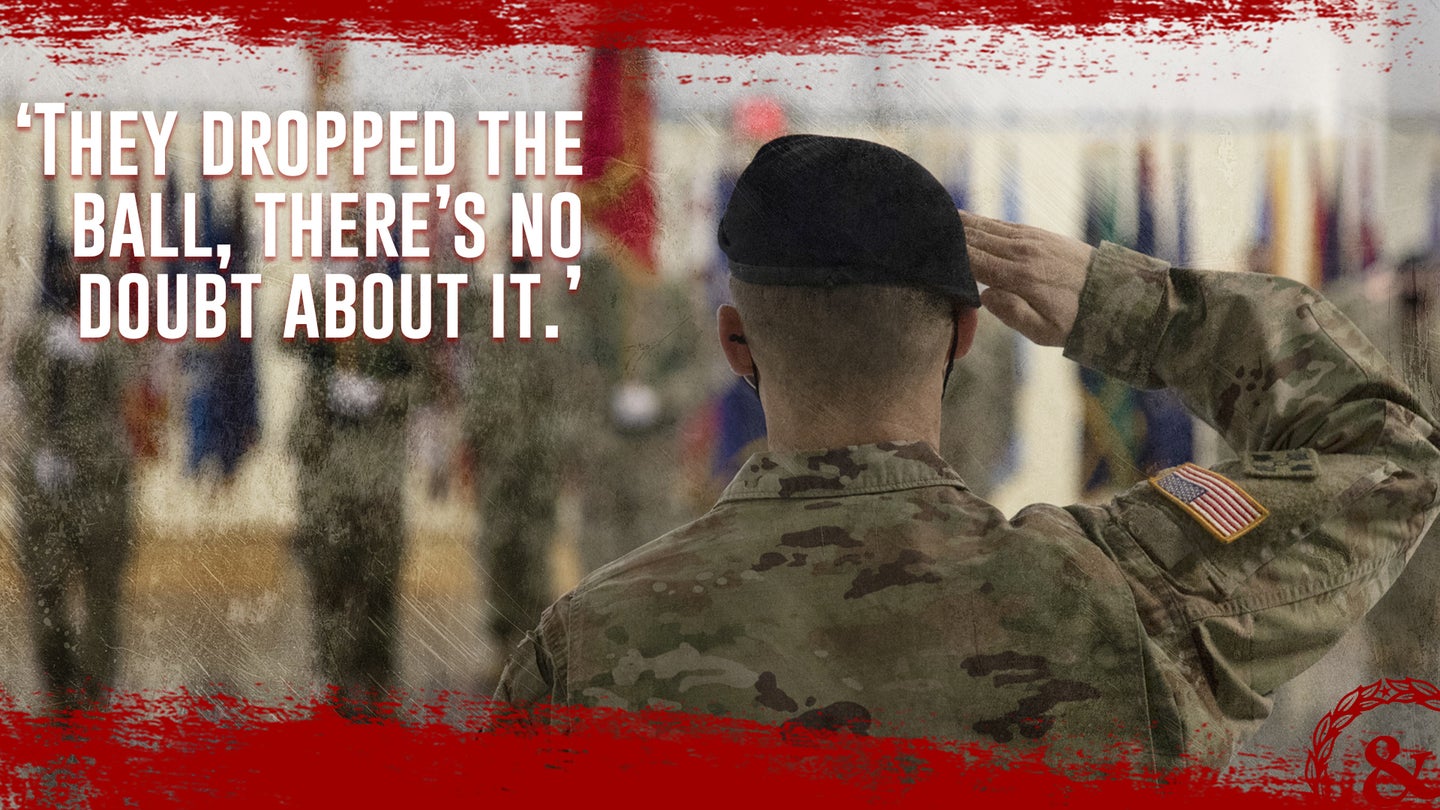 The Army now plans to review a brigade commander’s decision not to seek prosecution for a noncomissioned officer who was investigated for, and ultimately pled guilty to, raping the wife of one of his soldiers in 2017.

Staff Sgt. Randall S. Hughes, who this year pled guilty to several rape and assault charges and received a 13-year sentence, was accused of raping the wife of one of his soldiers in 2017. Army investigators found that her accusation was credible but Hughes’ chain of command declined to prosecute him, according to Army Times. Instead, he received a General Officer Memorandum of Reprimand, or GOMOR, after moving to another installation, where he later raped his 14-year-old daughter.

According to Army Times, Leah Ramirez and her husband, one of Hughes’ soldiers, hosted a Super Bowl party at their home in 2017. Ramirez said that Hughes encouraged her husband to take shots throughout the night, resulting in him eventually passing out drunk.

At the end of the night Ramirez got her husband into bed as the party guests left — except for Hughes, who later came outside with Ramirez and propositioned her for sex. When she refused, Hughes “grabbed her, forced himself upon her against a grill and later dragged her by the hair into her home where he raped her,” according to Army Times, which reported that Ramirez hid in her bathroom until Hughes left the house. She reported the assault the very next morning.

An Army official confirmed that Ramirez reported the rape in February and Army Criminal Investigation Command opened an investigation. But exactly what happened after CID concluded the investigation in January 2018 and deemed the allegations “credible” remains unclear.

Ramirez was informed that her accusation was found to be credible, according to Army Times. But Hughes wasn’t issued the GOMOR immediately; in August 2018 — a month after Hughes appeared on the 2018 selection list for sergeant first class — his brigade commander decided against prosecuting him and closed the case, an Army official told Task & Purpose. Lt. Col. Ebony Calhoun, a Fort Bliss spokeswoman, said the GOMOR, signed by Maj. Gen. Patrick Matlock, wasn’t actually issued until 2019.

Nevertheless, CID found Ramirez’s allegation credible, so why did his leadership at Fort Bliss decide not to prosecute him? Ramirez told Army Times that as far as she knew, CID “had enough evidence to believe it happened, and Fort Bliss still didn’t do anything.”

Army spokesman Matt Leonard said Hughes’ chain of command in 2017 “thoroughly reviewed the law enforcement investigation” of Ramirez’s accusation and “made the best decision it could” based on the information it had at the time. A second Army official emphasized that “a probable cause finding is not a final determination that there is sufficient evidence to prosecute.”

But the former chief prosecutor for the Air Force says that explanation doesn’t add up, since the standard across the military at the time for prosecuting crimes was probable cause.

“Actually that was, and really still is, the standard, that you can go forward with probable cause. There’s debate about whether that should be the standard, but that’s the exact language in the UCMJ,” said retired Air Force Col. Don Christensen, president of Protect Our Defenders, an advocacy group for sexual assault victims. “The convening authority must have probable cause … in order to prosecute a case. And at the time that this occurred in 2017, the standard was ‘warranted by the evidence,’ which is basically probable cause.”

After publication of this story, Leonard said the Army “will review the decision not to seek prosecution in 2017, based on the facts and circumstances as known at the time….in order to ensure we are serving the best interests of justice.”

The new review may provide clarity on some questions that remained unanswered: Why did Hughes’ brigade commander let Hughes slide? And what evidence did they have that made it supposedly impractical to take the charges further? Christensen said the military is often reluctant to look back and ask those kinds of questions because asking them would poke holes in the Army’s own justice process.

“There is really no way to look back at a case and say it was done wrong because doing so is basically admonishing people that you gave discretion to,” Christensen said. “If you give a commander convening authority discretion, whether or not they should take a case to trial or not, and then you…criticize somebody for that decision, what are you going to do?”

“If you look at it, you’re exposing the weaknesses of the process,” he further explained. “And you’re better off not exposing them, in their mind.”

Although the Army’s investigation was focused on Ramirez’s report, investigators learned years later that Hughes had continued his streak of assaults.

As Army Times reported, the Army later learned that as Hughes was being investigated for raping Ramirez in 2017, he violently raped his girlfriend at the time. That rape wasn’t reported then, but Hughes pled guilty to the assault during his trial in March and “avoided charges that he told his then-girlfriend to not speak to agents who were investigating Ramirez’s case,” as part of a plea deal, according to Army Times.

The Army official also said on Wednesday that during CID’s investigation from February 2017 to January 2018, there were no other reports made against Hughes. When his brigade commander declined to pursue action against him he was transferred to Fort Dix, New Jersey.

Army Times also reported that during CID’s investigation of Hughes, in late 2017, his 14-year-old daughter moved in with him. He “behaved inappropriately” towards her while they were still in Texas, but in March 2020 after moving to Fort Dix, Hughes gave her sleeping medication and raped her. She reported it to both her mother and the police and Fort Dix CID began an investigation that included five victims over more than a decade, according to Army Times, which ultimately resulted in his conviction.

Even after everything, Hughes’ daughter, Lesley Madsen, told Army Times that she considered herself “really lucky” because she had a team of CID agents “who cared a lot.” They put the work in, she said, and “started adding it all up.”

“It was just insane,” Madsen said. “Because none of us even expected the extent of what he did.”

The story of how the Army failed to protect victims from Hughes comes at a time when the service says it’s refocusing on improving its response to sexual assault and harassment in the wake of a damning report last year. The report, put together by an independent civilian committee, exposed just how pervasive assault and harassment are at the Army’s massive central Texas installation, Fort Hood. While the report looked at Fort Hood specifically, it was widely acknowledged in the Army that the culture at Fort Hood exists elsewhere, and isn’t specific only to that installation.

As former Army Undersecretary James McPherson told Task & Purpose last year, what happened at Fort Hood came down to asking leadership “what did you know, and when did you know it.” But the Army has so far seemed reluctant to retroactively ask those questions of former leaders who may have contributed to a harmful culture.

For instance, the civilian panel who compiled the Fort Hood report made clear “that the risk for sexual assault for women at Fort Hood was persistently high before and during the review period.” It’s unclear however if the Army is looking at how former Fort Hood commanders who have continued on in their careers might have contributed to, or even just overlooked, that culture.

And even after Army Times exposed how a serial rapist was able to slip through the cracks, the Army has not — in any of the statements provided — acknowledged that there may have been a mistake, an oversight, or anything of the sort somewhere along the way.

Leonard’s statement on Wednesday said CID investigators “tracked down new evidence and victims” after Hughes left Fort Bliss, which “allowed for a new assessment of the original allegation.”

It is true that there were new victims: After Hughes was let off after the 2017 allegation, he went on to rape his own daughter, who bravely reported the assault and spoke out in the Army Times article. But Christensen pushed back on the idea that there wasn’t enough evidence available to the Army after CID’s investigation in 2017, primarily because Hughes later pled guilty to the offense.

“The evidence has got to be overwhelming to get someone to plead guilty to a sex offense because they win so often and the consequences of guilty are so severe,” he said. “So unless they can show that there was some massive follow-on investigation — then my question is why didn’t you do this in the first place — that uncovered other evidence that they didn’t have related to specifically this 2017 offense, that tells me they had all the evidence they needed in 2017…[Ramirez] described a violent rape. I don’t see how you make that decision.”

“They dropped the ball, there’s no doubt about it,” Christensen said. “They blew it.”

Update: This story has been updated to include a statement provided by an Army spokesman after publication that the Army now plans to review the 2017 decision not to prosecute Staff Sgt. Randall Hughes.

Correction: A previous version of this article incorrectly stated that Hughes received a GOMOR before being moved to another installation. The article has been updated to reflect Hughes’ receiving a GOMOR after being moved.