Russia's Ministry of Defense has said it's ready to pursue an “international security” agreement that was discussed between Russian President... 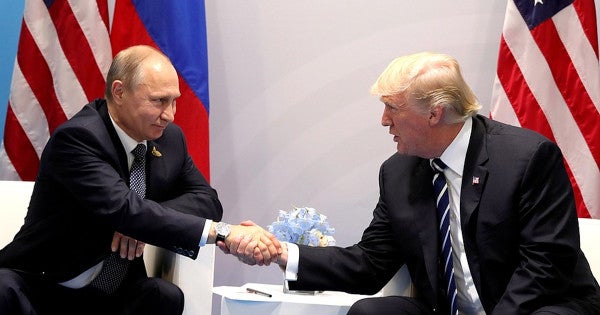 Russia's Ministry of Defense has said it's ready to pursue an “international security” agreement that was discussed between Russian President Vladimir Putin and U.S. President Donald Trump, but so far the Pentagon doesn't seem to have a clue of what that means.

A Defense Department spokesman told me “we don't currently have anything” when asked about Russian Maj. Gen. Igor Konsashenkov’s declaration Wednesday that there were “agreements reached between Russian President Vladimir Putin and US President Donald Trump in the sphere of international security achieved at the Helsinki summit.”

What agreements? What “sphere of international security”? DoD doesn't seem to know, won't say, or more than likely, is waiting on the White House to tell them what is going on — something the Pentagon has already had to do with transgender policy, joint exercises with South Korea, the “Space Force,” and parades.

A Pentagon spokesperson gave the same answer to Defense One on Wednesday. But a National Security Council spokesperson told Defense One the Helsinki summit was the “beginning of a process” between both countries “to reduce tensions and advance areas of cooperation in our mutual interest.” Still pretty vague, to say the least.

For now, all we seem to have is Moscow's side of the story regarding the summit. Anatoly Antonov, Russia's ambassador to the U.S., said Putin and Trump reached “important verbal agreements” that included preservation of the New START and INF arms control treaties. He also added that Putin made “specific and interesting proposals” on how Russia and the U.S. could cooperate in Syria — where both countries have fought via proxies amid the seven-year-old civil war.

Meanwhile, Defense Secretary Jim Mattis is reportedly “open to the possibility” of talking with his Russian counterpart, according to Reuters.