UNSUNG HEROES: The Navy Diver Who Died Trying To Save A Fellow Sailor When A Training Dive Went Wrong 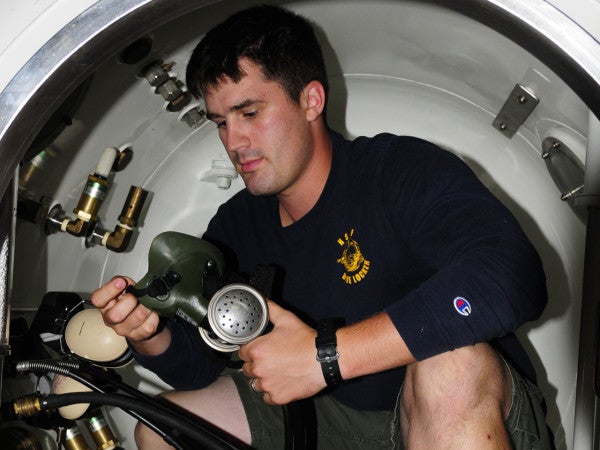 A routine training dive at Aberdeen Proving Grounds, Maryland, that went terribly wrong and left two young Sailors dead in February 2013 has emerged as a remarkable story of heroism, thanks to a Freedom of Information Act request by the Virginian-Pilot.

It’s a terrible story of leadership failures and negligence at high levels. But the story of the conduct of the victims in their final moments, couldn’t be a better story of honor and courage.

Navy Petty Officer 2nd Class Ryan Harris and Petty Officer 1st Class James Reyher of Mobile Diving and Salvage Unit 2 were tethered together during the dive last winter in a pond. Their mission was to go 150 feet underwater and reach a simulated downed helicopter.

But an investigation found that Reyher became trapped under debris, and Harris refused to leave him.

“Harris exhausted himself in an attempt to save Reyher,” the investigator wrote in the report obtained by the Virginian-Pilot. “Both divers resisted the natural instincts of self-preservation, in order to expel his last breaths in an effort to save each other.”

The other sailors couldn’t communicate with or reach them, their equipment failed, and the entire training exercise was poorly organized and supervised, leaving no room for malfunction.

The commander of the unit was sacked. Two supervisors were court-martialed.

According to Dan Lamothe at the Washington Post, however, Harris is slated to posthumously receive the Navy Marine Corps Medal for his sacrifice on that day.

The highest Naval medal that can be awarded in a non-combat scenario, it’s the same medal John F. Kennedy received when he saved the crew of his PT boat in World War II.

Harris was 23 years old at the time of his death.