People Are Mad About Profanity At The Concert For Valor. That’s Pretty F—ing Dumb

On Veterans Day in Washington, D.C., this year, thousands of people descended on the National Mall for a night concert... 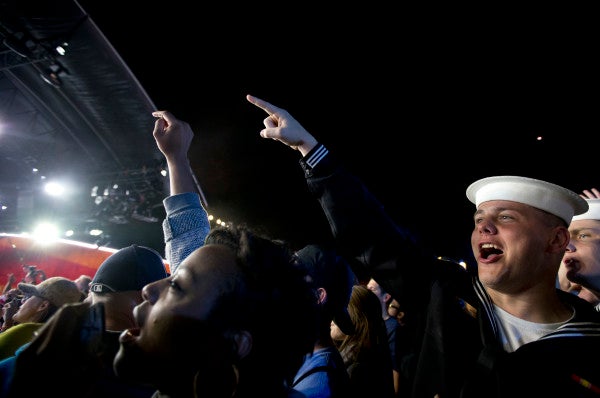 On Veterans Day in Washington, D.C., this year, thousands of people descended on the National Mall for a night concert hosted by Starbucks CEO Howard Schultz, HBO, and Chase.

The event raised a ton of money for great veterans charities like Got Your 6, and perhaps more importantly, raised awareness about a new generation of veterans of the post-9/11 era who feel all too disconnected from American communities that may not have felt the effects of more than a decade of war.

But in the days after the concert, all some people seem to be talking about is the amount of profanity used by the performers. A USA Today article titled “Did f-bombs ruin the concert for valor?” says that the word “fuck” was used more than 50 times.

I, for one, would like to join Eminem in wishing my fellow veterans, my fellow Americans, a happy motherfucking Veterans Day.

People are angry about this, but they shouldn’t be. Veterans are not delicate. To me, this stems from the flawed notion that being pro-military or pro-veteran is a conservative value, so it’s conflated with other conservative values, in this instance, family values. That’s not true, and it’s harmful. We need to view the highly diverse veterans population outside of the sphere of politics. If you’re offended by profanity, that’s fine, maybe don’t attend an Eminem concert. But don’t say it was offensive to veterans.

Eminem is one of the faces of the millennial generation, more than 2 million of whom volunteered to serve in the deserts of Iraq and the mountains of Afghanistan. But the vast majority of millennials have no connection to the military or the past decade of warfare. Eminem’s presence on that stage was invaluable.

Army veteran and Center for New American Security fellow Philip Carter described it as a loud, profane, and awesome bridge across the civilian-military divide.

Cursing isn’t disrespectful to the military community. If you don’t believe me, follow me to the nearest barracks smokepit. Alternatively, watch this video of a pre-mission briefing in Iraq and count how many f-bombs the Marine lieutenant drops in one minute.

In perhaps an even dumber indictment of the concert than the profanity, some folks are mad that Dave Grohl, Zac Brown, and Bruce Springsteen teamed up to sing “Fortunate Son.”

In a piece for the conservative Weekly Standard, subtitled “Unfortunate Son” [Ed. note, GREAT pun] Ethan Epstein Writes “The song, not to put too fine a point on it, is an anti-war screed, taking shots at ‘the red white and blue.’ It was a particularly terrible choice given that Fortunate Son is, moreover, an anti-draft song, and this concert was largely organized to honor those who volunteered to fight in Afghanistan and Iraq.”

Too bad “Fortunate Son” is not anti-military. It’s anti-draft, certainly, anti-blind patriotism. But it’s pro-soldier, pro-dissent, pro-America. I listened to it on repeat while writing this piece because it’s awesome. The 1969 classic ballad by Creedence Clearwater Revival embraces the everyday Americans who fought the Vietnam war and indicts the politicians who waged that war with no skin in the game who dismissed any dissent as being “anti-American.”

As actor and comedian Patton Oswalt noted on Twitter, himself the son of a Marine colonel, the song is pro-soldier and anti-chickenhawk.

The outcry about the song being performed prompted former Creedence frontman John Fogerty to release a statement.

“Years ago, an ultraconservative administration tried to paint anyone who questioned its policies as 'un-American,'” Fogerty said. “That same administration shamefully ignored and mistreated the soldiers returning from Vietnam. As a man who was drafted and served his country during those times, I have ultimate respect for the men and women who protect us today and demand that they receive the respect that they deserve.”

These knee-jerk criticisms of the Concert for Valor represent the worst kind of supporting the troops. Supporting the troops is not about flag waving in a censored and sanitized America that just says “thank you for your service” and supports every war no matter the circumstances.

Supporting the troops in 2014 needs to be about connecting the veterans of the messy and politically sloppy wars in Iraq and Afghanistan to an American populace that was far too separated from the warfront. That’s what this concert sought to do. It’s not neat, it’s not polite, it’s certainly not easy. But holy shit, is it important.