The Shot That Dropped Escaped Convict David Sweat Was Incredible

Following what may be the most epic prison escape in American history, convicted murderer David Sweat is back behind bars as... 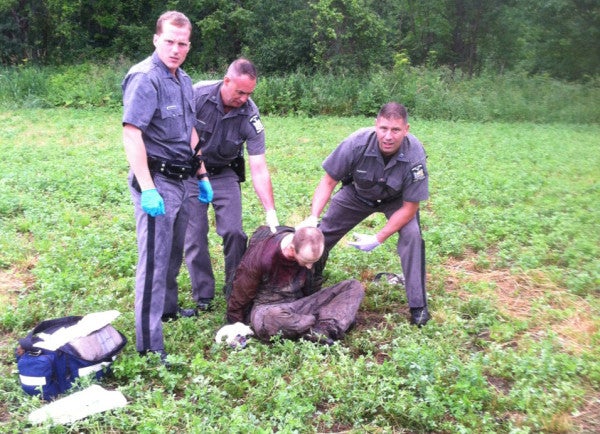 Following what may be the most epic prison escape in American history, convicted murderer David Sweat is back behind bars as of July 5, having been released from an Albany, New York, hospital.

Sweat was apprehended June 28 after 22 days on the lam. He was shot and taken into custody just miles from the Canadian border, and 40 miles from the prison in Dannemora, New York, where he had been an inmate.

But the conditions surrounding his capture, specifically, the shots that took him down, beg further review and commendation. In short, it was a damn impressive display of shooting under stressful conditions.

According to multiple media reports and accounts from the scene, Sweat was walking along a dirt road just two miles from the Canadian border when he was spotted by Sgt. Jay Cook, who got out of his vehicle and told Sweat, “Hey, come over here,” according to NBC News. Sweat took off running, and Cook gave chase.

This is where the incredible shooting comes in. Sweat was outrunning Cook, and growing ever-nearer to the treeline, where Cook feared he would lose the man. Cook fired two shots at his moving target, both struck Sweat in the torso, dropping him, and allowing authorities to take him into custody and provide lifesaving aid.

In many ways, Cook had prepared his entire life to take those two shots. According to a report by the Wall Street Journal, he was born and raised in Franklin County, New York, where the apprehension took place. He enlisted in the Air Force, obtained a criminal justice degree, and worked as a corrections officer before joining the New York State Police 21 years ago. In the New York State Police, Cook worked as a firearms instructor.

To anyone who has run a “failure to stop” drill in the military or law enforcement, Cook’s actions look straight out of the textbook. The drill calls for firing two shots at the center, or chest cavity, of your target; then, should your target fail to stop, you follow with a well-aimed shot to the head.

Cook fired only two shots, aiming center mass, the largest part of his target, and he landed them both. That’s the way it’s taught. But to execute that under Cook’s conditions is nothing short of incredible.

Cook was alone, in rural landscape, pursuing one of the most wanted and most dangerous men in the country. He had just been running, adrenaline and heart rate elevated. Amid all of that, he hit a moving target, and he did it with a pistol.

It was a legendary, heroic moment that will undoubtedly be taught in firearms courses for a long time. The public owes a debt of gratitude to Cook, but so does Sweat. Cook’s poise and restraint, and the lifesaving aid provided at the scene by emergency officials, almost certainly saved Sweat’s life.

“Badass” would be an equally apt description.