Last week, there were more members of the American military deployed to quell the violence in Ferguson, Missouri, than deployed... 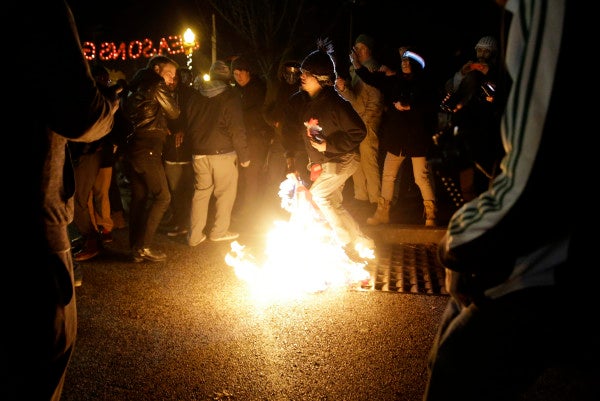 Last week, there were more members of the American military deployed to quell the violence in Ferguson, Missouri, than deployed to Iraq to defeat the Islamic State. Missouri Gov. Jay Nixon upped the number of guardsmen in the St. Louis suburb to 2,200 due to protests resulting from a St. Louis County grand jury’s failure to indict Ferguson police officer Darren Wilson in the shooting death of unarmed 18-year-old Michael Brown.

The situation in Ferguson has been the subject of intense attention. There have been constructive protests to express very real and very important tensions within the community.

There has also been senseless destruction, far too much of it that benefits no one. Businesses have been looted and burned, police cars set on fire. As part of that, video has surfaced of protesters burning an American flag. I believe that burning a flag as a part of protest is dumb, but it’s a first amendment right, and should not be banned. Protesters are and should be allowed to burn the flag. But understand that it’s really going to upset some people who care an awful lot for that flag.

To that end, some of the members of the Missouri National Guard went out in the street after the flag was burned seeking to recover the pieces of Old Glory. The soldiers were joined by St. Louis County police lieutenant Jerry Lohr, who was recently profiled by the New York Times for his ability to ease tensions and connect to the community.

Lohr is seen telling the protesters “Just so you guys know, the guards over here are looking for pieces of an American flag that got burned.”

The protesters seem affronted and ask why.

“Because it’s their flag,” Lohr responds.

“How is it their flag?” one asks. “Is it their property?”

Those soldiers know it’s much more than that. Watch the exchange below.