One Quote Shows The Enlisted Ranks’ Problem With Hagel’s Departure

Secretary of Defense Chuck Hagel is on his way out, at the request of President Barack Obama, after just 18... 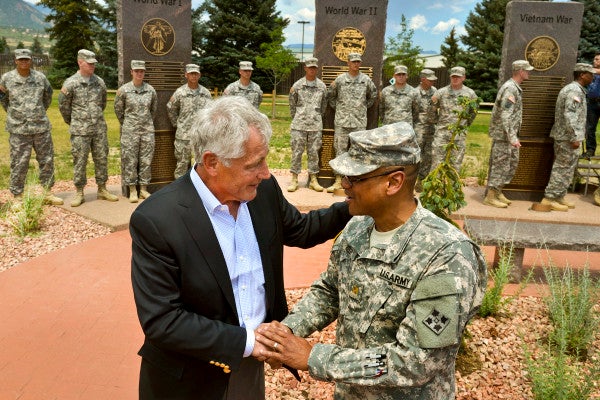 Secretary of Defense Chuck Hagel is on his way out, at the request of President Barack Obama, after just 18 months in charge of the Pentagon.

Various media reports have offered insight on Hagel’s forced resignation: Hagel had a hard time recovering from an unexpectedly contentious Senate confirmation process; the Obama administration wanted to build consensus around its strategy to defeat the Islamic State; the White House national security team has an issue with micromanagement.

But Hagel’s departure promises to have an effect on the military that extends beyond the halls of the White House or the Pentagon. As a former enlisted soldier and a Vietnam War veteran, Hagel was beloved by the rank and file.

Today, CNN’s Pentagon correspondent, Barbara Starr, tweeted an interaction with two young troops that details this sentiment. I’ve removed the shorthand that she used in the tweet.

“Do you think Secretary Hagel got fired because he cared more about the troops than he cared about the White House?” The troops reportedly asked her. “That's what we think.”

This sentiment suggests that in removing Hagel in the interests of creating a cohesive national security team, Obama may have created the perception among enlisted service members that he values loyalty and consensus ahead of the culture of the military outside of D.C. and the way troops view their leadership in Washington.

Hagel, the sole Republican in the president’s cabinet, was seen as a man of the people who cared most about the enlisted men and women, even ahead of what the president or the generals thought. It may not have been true, but it’s an important perception. It’ll be a trait quite difficult to replicate in whoever replaces Hagel.