UNSUNG HEROES: The Combat-Decorated Marine Who Sprang Into Action When The Washington Navy Yard Was Attacked 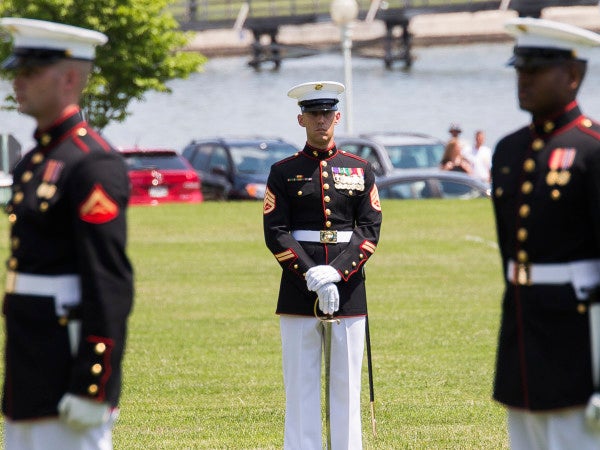 Shortly after 8 a.m. on Sept. 16, 2013, a lone gunman opened fire at the Washington Navy Yard taking 12 lives. Not far away, Marine Staff Sgt. Zachary Rubart was training at Marine Barracks Washington as the platoon sergeant for the Marine Corps’ famed Silent Drill Platoon, reported Marine Corps Times. Hearing reports of an active shooter, Rubart immediately sprang into action, forming a quick-reaction force from the ranks of his Marines to neutralize the potential threat.

Rubart has served three combat deployments, two in Fallujah, Iraq, where he earned a Purple Heart, and one in Afghanistan.

“Although wounded with a ‘priority’ medevac status, Sergeant Rubart instructed his section to cordon the blast site and search for a potential triggerman,” his Purple Heart citation reads, putting his dire needs out of the way to assure his unit was safe. He would rejoin his unit just 16 days later, his wounds still bandaged.

His combat experience, selflessness, and quick thinking was precisely what spurred him into action the day of the Washington Navy Yard shooting.

Assembling the Marines, Rubart led them to the armory with his ceremonial sword still attached to his him, writes Marine Corps Times. Armed with M4 carbines, Rubart’s small contingent of Marines linked up with D.C. SWAT at the Washington Navy Yard and began to clear buildings one-by-one. The shooter was killed by police, says the Guardian, however a search was still underway for at least one more man possibly involved in the shooting.

Now 31, Rubart is considered “a proven leader who can be trusted in high-stakes situations” says Marine Corps Times. Other than his service on duty in the Marine Corps he has a consistent record of community service.

He currently organizes opportunities for volunteers to mentor children of fallen troops for the Tragedy Assistance Program for Survivors, is known to serve veterans at the Armed Forces Retirement Home in Bethesda, Maryland, and he also gives his time and energy to provide for the homeless near his station at Marine Barracks Washington. When stationed out of Camp Geiger, North Carolina, Rubart served a local youth soccer league as a coach for more than 100 hours.

Rubart is known for his leadership on the clock as well, now the staff NCO for the Marines Corps security force at the White House Communications Agency in Washington, at Joint Base Anacostia-Bolling. The roughly 50 Marines who provide security and support to the presidential detail are under his supervision.

He has been vital in building the relationship between the Marines and the White House Communications Agency such that they are now indispensable, 1st Sgt. Michael Brown, Rubart’s senior enlisted supervisor told Marine Corps Times. Because of Rubart’s efforts to innovate the role of Marines, they are now utilized to assist with trips inside the continental U.S. as well as overseas, whereas before they were only needed overseas.

“He’s making it a necessity,” not just a nice-to-have, said Brown. “He’s making our place at the table a little bigger.”

Lauded as a hero by Military Times’ Managing Editor Tony Lombardo in an interview, Rubart replied with absolute humility. “I will gladly offer that I don’t think any of us are heroes,” Rubart said of the himself and the four other honored as servicemen of the year.

“For us, when you define heroism, it’s the four Marines and the sailor that were killed in Chattanooga,” Rubart went on, mentioning a recent shooting that claimed the lives of five servicemen.

“It’s the Marines, and soldiers, and airmen, and service members in general that have given their lives in support of the defense of this nation. This, this is a privilege. This is an honor.”