The Army Corps of Engineers is feeling cute and we're here for it. 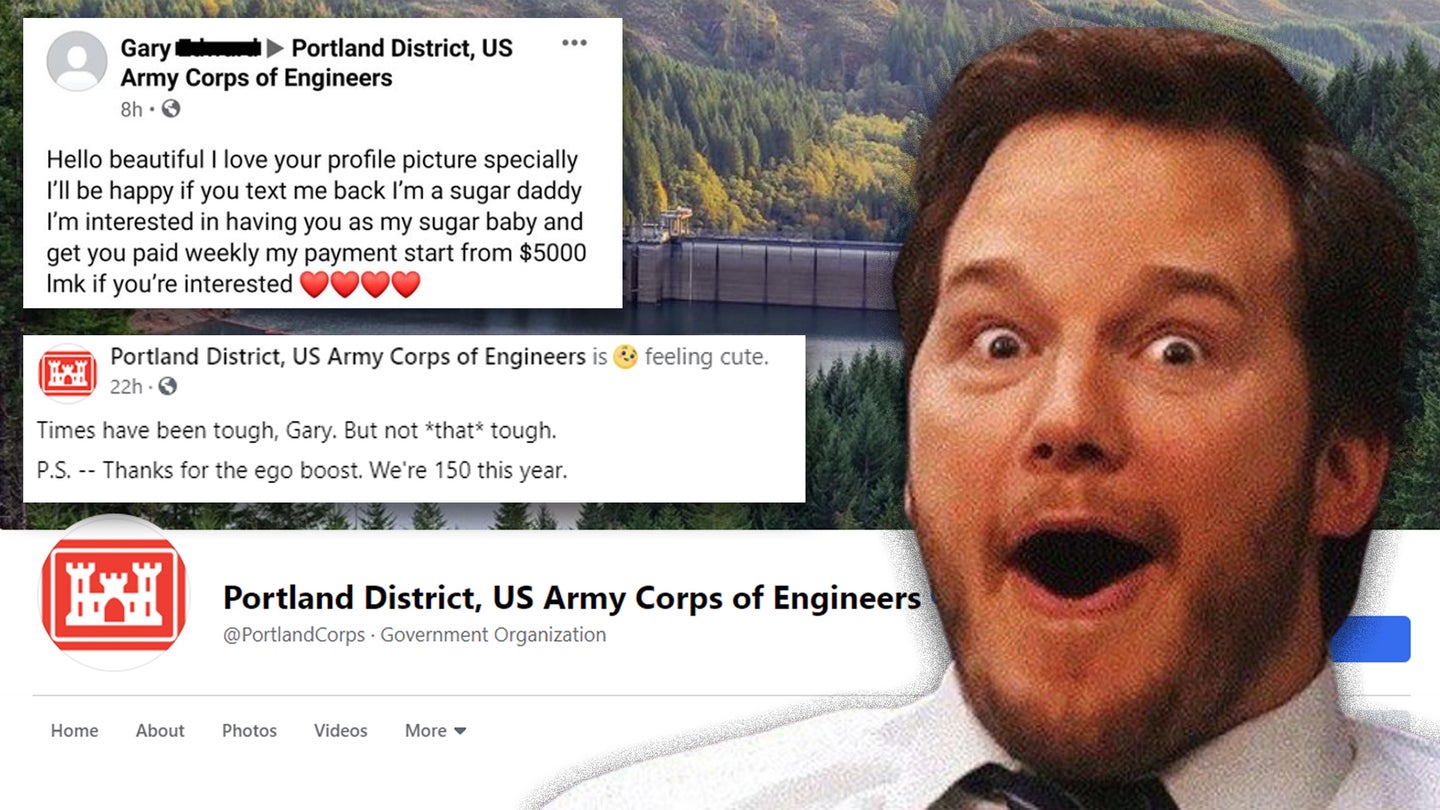 Ah, bots, the horse flies and mosquitos of the internet. They pop up uninvited and abruptly slide into your DMs or derail a comment thread with some awkwardly worded and often grammatically incorrect pickup line or a bit of questionable financial advice. Much like the pesky insects that invade picnics and beach parties, there’s no real cure for bots. So why not have a little fun swatting them down?

That seems to be the tactic of Portland’s U.S. Army Corps of Engineers which had this fantastic reply to what I sincerely hope was a bot:

On Tuesday, the official Facebook account for Portland’s Army Corps of Engineers unit shared a screenshot of a comment they appeared to have received from a reader, along with their witty retort.

In it, a man identified only as Gary — his last name was blocked out — seems to be asking the Army Corps of Engineers to be his sugar baby and offers to pay $5,000 for the privilege, which is a bold strategy for a number of reasons, one of which being: The Army Corps of Engineers has roughly 37,000 members under its employ, which means that Gary would have to fork over $185,000,000 if they agreed to his solicitation.

Now, if you’ve spent any time on the internet in the last decade, it’s abundantly clear that Gary is either a bot or a not-so-talented scammer — probably both. And that seems to be the same conclusion that the Corps of Engineers came to when they screenshotted the post and reshared it with the caption: “Times have been tough, Gary. But not *that* tough. P.S. — Thanks for the ego boost. We’re 150 this year.”

The playful reply from an official government account is part of a growing trend in which military public affairs officers, and even some senior leaders, seem to have collectively decided to stop ignoring trolls and bots, and are now actively mixing it up with them in the comments.

For example, Lt. Gen. Ted Martin, the deputy commanding general of Army Training and Doctrine Command, has developed a reputation for going after “snarky” commenters on social media. There’s also Chief Master Sergeant of the Air Force JoAnne S. Bass who will not hesitate to absolutely trounce trolls who can’t tell the difference between a playful joke and outright disrespect.

And then there’s a fan favorite at Task & Purpose: the Public Affairs Office at Parris Island, South Carolina, where Chief Warrant Officer Bobby Yarbrough frequently drops into the comments when the “well actually” guys show up in force.

And it looks like the Army Corps of Engineers is poised to join the military’s ranks of distinguished troll hunters, and we are most definitely here for it.