In Most Texas Story Ever, Army Convoy Stops At Whataburger On Way To The Border

A U.S. Army convoy headed to the U.S.-Mexico border made a brief pit stop at Whataburger for lunch on Monday... 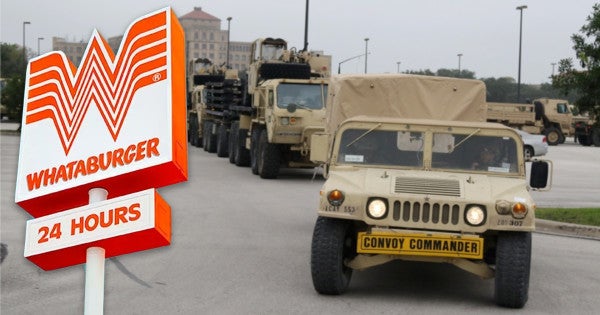 A U.S. Army convoy headed to the U.S.-Mexico border made a brief pit stop at Whataburger for lunch on Monday because that ketchup is bomb as fuck and MREs are most certainly not.

According to the Alice Echo News Journal, which currently has this important news as its top story, the convoy from the 289th Quarter Master Company, First Calvary Sustainment Brigade parked an array of Humvees and big rigs alongside the chain restaurant in Alice, Texas.

The convoy left Fort Hood on Friday on its way to the border for Operation Faithful Patriot in response to a migrant caravan slowly making its way north through Mexico, according to The Killeen Daily Herald. The soldiers apparently stopped at Fort Sam Houston in San Antonio over the weekend before heading to the glorious-ness that is Whataburger on Monday.

The logistics unit brings showers, laundry facilities, fuel, vehicle maintenance, and food and water support to its deployment south, where it joins some 7,000 U.S. troops being sent there. But even if they are bringing hot chow and Army cooks, nothing is going to beat the freshly made burgers, gorgeous fries, or downright deliciousness of Whataburger's fancy ketchup.

The border is about two hours away from the Alice location.

Fortunately, there are more than dozen Whataburger restaurants all along the border, so soldiers will have a place for R&R; when not holding the line on the Southern Front.