The Air Force tends to value technical proficiency as a mark of leadership, but that may be leaving noncommissioned officers without the right people skills. 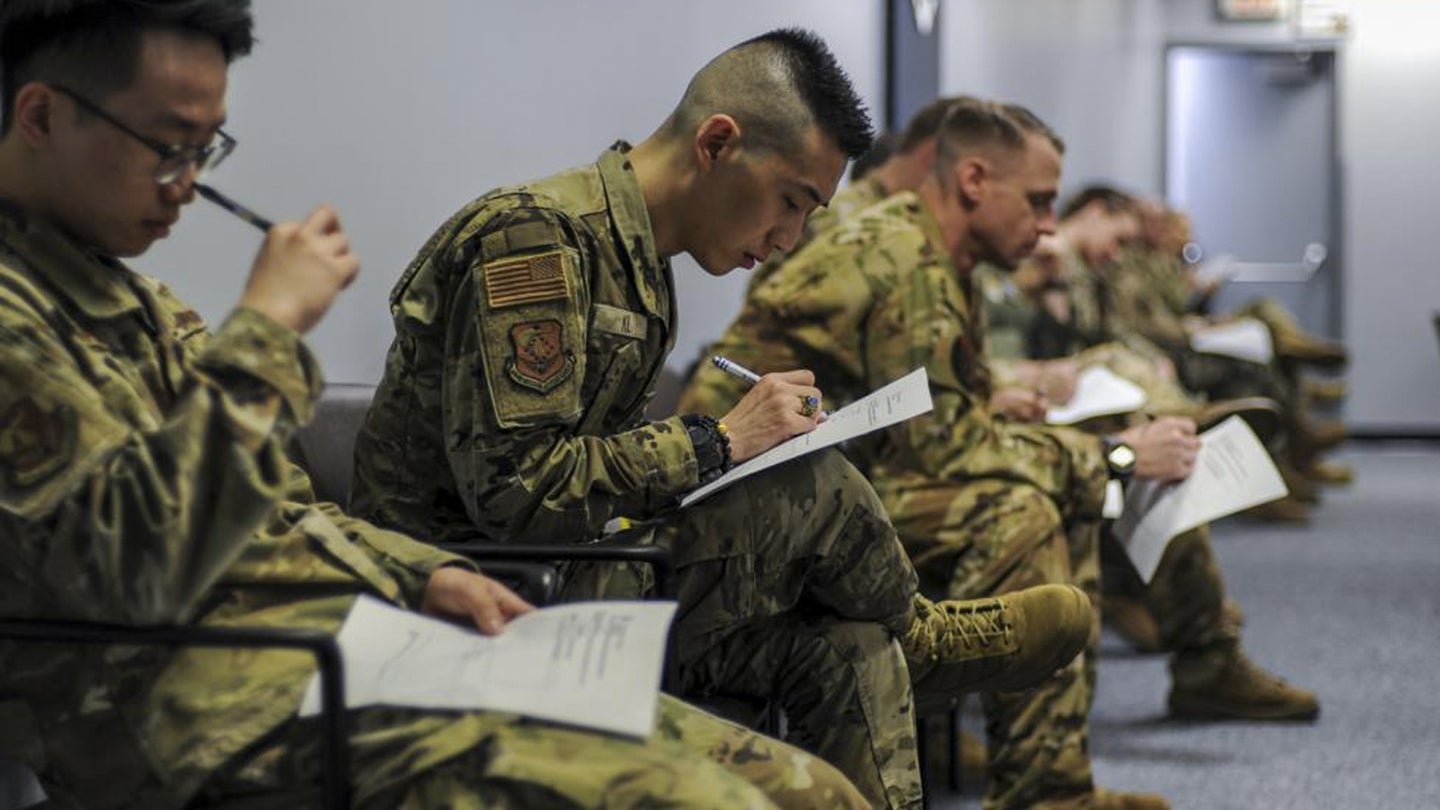 It was a tough Tuesday for many Air Force staff sergeants hoping for a promotion to technical sergeant, a role that would give them more responsibilities as well as a bigger paycheck at a time when inflation and high housing prices are cutting into the bank accounts of many service members. The Air Force Personnel Center announced that out of 33,935 eligible staff sergeants, only 5,430 had been selected for promotion to technical sergeant, a selection rate of 16%. That’s a 10-point drop from last year’s 26.94% selection rate, and many airmen worry that future promotions will be just as competitive in light of recent news that the Air Force is slowing down its promotion rate for noncommissioned officers in ranks E-5 (staff sergeant) through E-7 (master sergeant).

“The Air Force is expecting lower promotion rates for the next few years due to enlisted grade restructuring, a leveling-off of end-strength growth, and high retention levels,” the service announced on July 7. “Through this realignment, the Air Force intends to balance and increase experience within its noncommissioned officer tier.”

The Air Force Personnel Center attributed the low number of new tech sergeants to the same reasons: enlisted grade restructuring, a leveling-off of end-strength growth, high retention levels, and the new Promotion Recommendation Score, which “places value on the experience of airmen and sustained superior performance,” and is meant to help bolster the leadership experience of Air Force noncommissioned officers, the service wrote.

Many airmen did not react positively to the news. Social media pages on Reddit and Facebook were soon filled with posts lamenting that they would never rise up the ranks. The news also came at a tough time for many airmen: as the service had already selected a mere 14.8% of eligible tech sergeants for promotion to master sergeant, and staff sergeants were already waiting to hear whether they had been selected for tech sergeant.

“It’s fucking bullshit,” the admin of the Facebook page Air Force amn/nco/snco, told Task & Purpose about the promotion slowdown release. The page has 85,000 followers and is a kind of town hall for airmen to voice their concerns anonymously. “Airmen should have been told months ago,” the admin, an Air Force veteran himself, added.

However, top Air Force leaders argue that the slowdown is necessary for the health of the service. The service currently has too many inexperienced NCOs and too few junior enlisted airmen at the start of the pipeline, the branch recently announced. Retention levels are also now “record-high” across the enlisted force, so there are not as many airmen leaving to make room for others to move up.

“This change really comes down to properly structuring our Air Force as we manage higher retention levels and a leveled end-strength growth,” Chief Master Sergeant of the Air Force JoAnne Bass wrote on Facebook. “This may not be the easiest path to take, but it is the right, and necessary, one for our Air Force.”

That path likely felt very difficult for many staff sergeants learning on Tuesday how comparatively low the selection rate for tech sergeants is this year. The last time the selection rate for tech sergeant was this low was in 2013, when the rate was 15.03%, said Mike Dickerson, the chief of media relations for the Air Force Personnel Center. Before that, the rate sank to 15.13% in 1997. This year’s rate of 16%, while not unheard of, is a sharp drop from last year’s rate of 26.94%, and the 2020 rate of 29.08%.

Air Force leaders say the promotion slowdown is necessary for the health of the force, but what decisions led to today’s conditions that made the force unhealthy? One expert suggested that it’s largely due to Congressionally mandated force requirements for the branch, but it’s also due to the Air Force being the most tech-heavy military service.

“It’s a challenge in the Air Force, which has so many specific technical skills, particularly in maintenance,” said Kate Kuzminski, senior fellow and director of the Military, Veterans and Society Program at the Center for a New American Security. “Having more senior enlisted airmen means more technical skills and leadership skills, but it can also end up being short-sighted” when there are not as many junior enlisted coming up the pipeline.

Kuzminski pointed out that the Marine Corps is dealing with the opposite problem, where about 75% of its first-term Marines leave the service at their first opportunity and don’t stay to become experienced NCOs. However, the Air Force’s problem may be worse. Unlike the Marines, which have NCO billets waiting to be filled, the Air Force has to pump the brakes on the promotions of noncommissioned officers who the service has already put a value on by promoting them to their current grade in the first place.

“The Air Force may have to make space for more junior airmen by cutting NCOs who they have already deemed valuable,” Kuzminski said.

The Air Force operates some of the most expensive, complicated equipment in the military, so it makes sense that the service would emphasize technical proficiency in its mentors and leaders. But that emphasis sometimes comes at the expense of the people skills that make a good leader, Kuzminski said. The expert pointed out that in the Army, a fresh lieutenant might lead a platoon of 20 or more soldiers from day one of his or her career. But in the Air Force, and especially with pilots, an officer may not be called for that type of leadership role until they’d been in for a decade or more, she said.

“It’s not a knock on anyone, but there’s a lot that comes from time in service that contributes to knowledge of culture, of service, and of leadership,” Kuzminski said.

The emphasis on technical proficiency came into sharper focus in 2016, when the Air Force began eliminating time-in-grade and time-in-service points for enlisted promotion. The time-in-grade and time-in-service system meant that airmen earned promotion points for how long they held their current rank. Getting rid of it meant that an airman who was great at their job could move quickly up the ranks, but possibly at the expense of the hard-won life lessons gained by spending a while at the bottom of the ladder.

“When we think of a very confident NCO, we think of someone with technical knowledge but also wisdom and gut experience,” Kuzminski said. “Because the Air Force values technical proficiency, that was the foundation of fast promotion, but that didn’t necessarily account for experience and wisdom.”

Getting rid of time-in-grade and time-in-service may have been the right thing to do to create a stronger force, Kuzminski said, but it also shook up the predictability of the old system, where airmen moved up the ranks at a comparatively regular speed.

“In the old system, there were no winners or losers, it was just predictable,” she said. “And with the new system, some will promote slower and some faster.”

Now, about six years later, the Air Force says its NCO corps has too many inexperienced airmen in its ranks and needs to slow down the pipeline so that airmen get an average of one additional year of experience at the rank of staff sergeant (E-5) and technical sergeant (E-6). That’s one of several changes the service is implementing to grow its enlisted corps on both the technical and leadership side. Another is the Promotion Recommendation Scores, which Chief Master Sergeant of the Air Force JoAnne Bass told Task & Purpose “will help us factor in experience points into the promotion system.”

The Promotion Recommendation Scores seem to balance out the elimination of time-in-grade and time-in-service because it is designed to avoid punishing airmen who are high-performing but have been in the same rank for more than a year. The system’s “central tenet” is to award both performance points for the airman’s good performance, as well as experience points based on the airman’s past ratings earned in his or her current grade. Bass said in October that the scores are “a step in the right direction to ensuring we recognize that experience, along with sustained superior performance.”

“From there we will continue to look at the data to ensure we are on target,” Bass told Task & Purpose. “We’ve got to play the long game, and focus on the future force. That requires us to look at how we do business today, and make the needed changes to our current processes, policies, and systems to get after the Air Force of 2030.”

The Air Force’s NCO corps is the backbone of its success, which is why it’s vital to make sure those NCOs have the experience they need going forward, Bass said.

“We are the world’s greatest Air Force because of our strong NCO corps, and we must maintain that strong NCO corps with a solid foundation of experience that our Airmen bring to the mission,” she said.

Still, the timing of the reevaluation may be difficult for some airmen who were hoping to get the larger paycheck associated with a higher rank. The Associated Press reported in November that as many as 160,000 active-duty service members were “having trouble feeding their families.” And that was before rising gas prices and inflation over the past several months drove up economic uncertainty for families across the country, in particular for junior service members.

“Things have changed over the past two years,” Kuzminski said. “The last couple summers, during [permanent change of station] cycles, you might move from Fort Knox to Hawaii where the cost of living jumps up 300% … When you consider low military spouse employment rates due to PCS or low availability of child care, that’s an incentive to pursue faster promotions.”

Bass also said on Facebook that she and her fellow top enlisted service members from other branches are “pushing for a holistic military compensation and base pay review,” she said. “It won’t be easy … but we’ve started moving the ball.”

The Air Force may have been able to better prepare fast-moving NCOs for leadership by setting aside more professional military education time for those airmen, Kuzminski said. Still, she saluted the service for “leaning forward” to try to balance its force for the future.

“It’s a good thing to use that flexibility,” she said. “But it’s also a learning curve.”