"I definitely would like to think any other Soldier, present or retired, would do it." 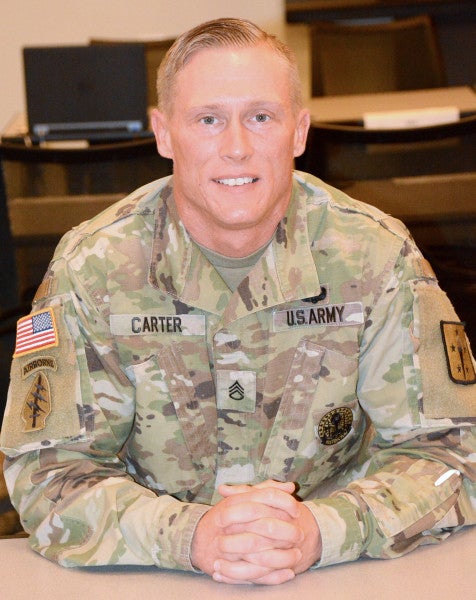 As Staff Sgt. Joshua Carter tells it, he was just in the right place at the right time when he helped save three people stranded on an underpass during a flash flood.

Carter — who serves with the 832nd Ordnance Battalion and is currently attending the Senior Leader Course at the Logistics NCO Academy at Fort Lee, Virginia — was leaving the installation on the morning of Aug. 15 when he saw traffic “at a standstill” off the interstate, according to a Fort Lee press release.

Per the release, Carter pulled over when he saw “a number of people stopped and taking photos,” and some looking over the bridge, dangling “a ratchet strap toward the ground.”

He heard someone shouting that a woman who couldn't swim was stuck in her car, which was in a water-filled underpass below the bridge.

“I took my jacket off and ran down to the water,” Carter said in the release. “I saw a lady in the driver's seat. The water was up near her neck, and she was holding her purse above her head just staring forward not doing anything.”

Carter and another man jumped into the water, swam to the woman's car, and wrestled her door open through the water. They eventually got the woman free from her vehicle and brought her to a bystander's car, where they warmed her up with blankets.

As if that wasn't enough, Carter went back into the water and helped free a couple in an SUV. He said they later explained to him that the water “did not look that high,” and that when the vehicle got stuck and water started pouring in, “they were too scared to exit the vehicle. They were just waiting for help.”

The man who helped Carter rescue the first woman left shortly after their rescue, and his identity remains a mystery. The two didn't exchange any words, Carter said, they were just “on the same page” about helping the woman.

Carter stayed to ensure no one needing medical attention, and left after a state trooper arrived.

He credited the lessons his parents taught him from a young age for his actions that day, and said there's “no denying the divine part” of his being there.

“God had me leave the (school) at the time I did, take the exit I did and be on the highway at the time I was for a reason,” Carter said, adding that while his Army training played a big part, he'd hope “anyone would have done the same thing.”

“I definitely would like to think any other Soldier, present or retired, would do it. That’s where we as Soldiers come in,” he explained in the release. “It’s not always combat, it’s the everyday operations, and making sure we make the people around us better, whether they wear a uniform or not.”

Sgt. 1st Class Delvin Shinn, an instructor at the leadership course at Fort Lee, said despite only knowing Carter for three weeks, he wasn't surprised at all to hear that the soldier had done something like this.

“Staff Sgt. Carter is one of those NCOs who’s always trying to lend a helping hand to those who need help,” Shinn said. “He puts it out there to let them know, ‘if you need help, I’m here.'”