"Taking care of our own is fundamental to leadership in the Marine Corps." 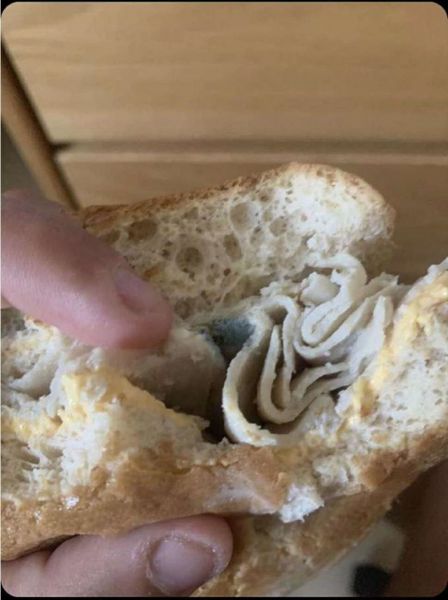 It wasn't long after the Marines and sailors of the 1st Battalion, 2nd Marine Regiment arrived in Japan that they were served lunch with a side order of mold.

Members of the unit, which recently arrived in Okinawa on a regularly scheduled deployment, on Monday were given spoiled sandwiches while in a mandatory 14-day quarantine period, though officials said the issue was quickly identified and resolved.

“These were prepackaged meals from a vendor that were previously identified for disposal,” said Maj. Ken Kunze, a Marine spokesman. “They were mistakenly served to Marines.”

Kunze said the problem stemmed from an oversight among food services personnel at Camp Schwab, which has served hundreds of thousands of meals to servicemembers on the island and doesn't reflect their otherwise “exceptional service.”

Indeed, sandwiches inside of larger meal kits supplied by a San Francisco company named Duty Bound were identified as being “in a degraded state” days before they were mistakenly sent out to Marines in quarantine, the official said.

That led to a number of photos of the spoiled food appearing this week on Instagram and Facebook, which quickly spread among Marine veterans and family members on and off the island. Some showed pre-packaged sandwiches which appeared to show an expiration date from Dec. 2018. “They servin T virus out here,” read one such photo's caption.

Then on Tuesday, a unit representative tried to explain what happened to concerned families of the Marines, though the email seemed to make things worse.

“Apparently, some sandwiches were found to have mold on them,” wrote Tom Cluen, the battalion's deployment readiness coordinator, who works closely with its commander Lt. Col. Gabriel Dana and senior enlisted advisor Sgt. Maj. Michael Youngblood to keep families informed while Marines are deployed away from their North Carolina base. “This was the result of sandwiches not being wrapped properly.”

When asked why families were apparently misled about the issue, Kunze said it was possible that Cluen meant to say the meal kits were “packed” instead of “wrapped” incorrectly (Cluen did not respond to request for comment).

“While the date of the sandwich shows a package date in 2018, the sandwich is still safe for consumption as long as it is kept in a frozen state and consumed within seven days of thawing (per the instructions on the label),” Kunze said. And according to the company that made the sandwiches, the number on the package is actually not an expiration date at all.

“The number in question on the label was not an open date, but a lot code for tracking purposes,” Philip Gioia, president of Duty Bound, said in an email to Task & Purpose. “This lot code corresponds to a date.”

“The sandwiches are shipped frozen and have a 365-day shelf life from date of production,” said Gioia. “Upon thawing the sandwiches should be consumed within 7 days, as stated on the product label.”

That, of course, didn't happen.

“The manager was notified via phone on Friday, but somehow the meal kits were issued to the Marines in [restriction of movement status] by mistake.”

In response, the officer in charge of delivering the meals to Marines initiated training among personnel and reinforced the importance of inspecting meals before they go out, Kunze said.

“Taking care of our own is fundamental to leadership in the Marine Corps,” he added.