A Surprise From The Rock Left This Combat Veteran In Tears

What started out as a an interview with Ford Motor Company turned into an epic surprise for Army combat veteran and... 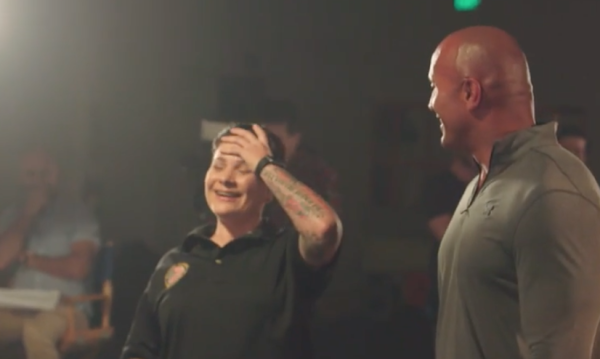 What started out as a an interview with Ford Motor Company turned into an epic surprise for Army combat veteran and Purple Heart recipient Marlene Rodriguez.

While discussing her veteran charity work, Rodriguez was caught completely off guard when Dwayne “The Rock” Johnson appeared and interrupted her with a comment, “I heard I wasn’t the only one with the badass tattoos.”

The Rock superfan was stunned as Johnson offered her tickets to his “Baywatch” premiere. But that wasn’t all; his next surprise — a taxi-yellow, totally customized 2018 Ford Mustang GT — left her speechless and in tears.

When she asked why, The Rock simply replied, “Because of everything you’ve done, and everything the boys and girls you’ve served with have done.”

Rodriguez deployed three times to Iraq, and was injured twice by blasts that left her with a traumatic brain injury so severe she now has seizures. One bomb also cost the life of one of her soldiers, which she recalled during the interview. After she was medically discharged, Rodriguez became the first female member of the 49th Chapter of the Military Order of the Purple Heart.

“I don’t deserve all this … my soldier does, he gave his life,” Rodriguez said.

“Don’t you think he’d want to see you rolling in this, having fun?” he replied.

Watch the surprise below.