Warfare and entertainment are two of the United States’ most known exports. While the world seems to have mixed feelings... 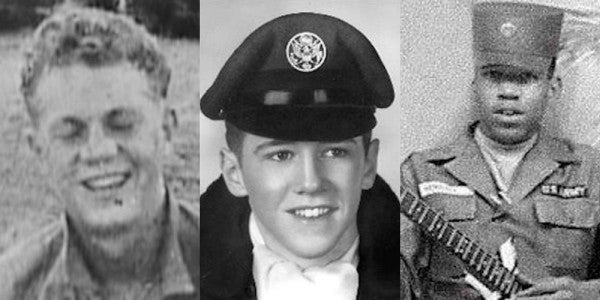 Warfare and entertainment are two of the United States’ most known exports. While the world seems to have mixed feelings about the individuals who both maintain and benefit from those industries’ ranks, they hold a special place in the collective hearts of Americans. Quite often, the celebrities and soldiers we cherish have spent time cutting their teeth in both worlds.

Most notably, Medal of Honor recipient and U.S. Army infantryman Audie Murphy walked away from World War II as the most highly decorated serviceman of that conflict and, until his death in 1971, embraced a successful career as an actor in popular westerns. Screen legend Jimmy Stewart retired from the U.S. Air Force as a brigadier general in 1971 with five Oscar nominations under his belt. There are hundreds of Americans who served in uniform that went on to noteworthy film, musical, and writing careers.

But while most had happy transitions from their issued uniforms to the wardrobe trailer, a handful of respected entertainers had a tough time fitting into the military. Here are some veterans who were more than happy to ditch their rifle for a mic, guitar or pen.

Considering he was a man who spent his entire entertainment career railing against the establishment, it’s hard to believe comedy legend George Carlin ever wore a military uniform. After dropping out of school in ninth grade, Carlin joined the Air Force in 1954 and spent his early years as a radar technician at Barksdale Air Force Base in Bossier Parish, Louisiana. While still serving, he moonlighted as a disk jockey in nearby Shreveport.

It’s evident that the outspoken Carlin the world came to know in 23 comedy albums, 14 HBO specials, and numerous television and film roles, got his early bouts of rebellion while in uniform. He racked up an impressive three court-martials, several other disciplinary actions, and a general discharge three years into his enlistment, according to a Variety article printed shortly after his death in 2008.

Hunter S. Thompson brought a famous manic concoction of prose and, well, complete and utter weirdness to this world. After serving a brief stint in jail as a teenager, he enlisted in the Air Force in 1955 and, upon completing basic training, found himself writing for the base paper at Eglin Air Force Base south of Valparaiso, Florida. Though his command didn’t allow him to take on outside work, Thompson snagged himself a position at a local paper — his first professional writing job outside of the military.

While respected by his superiors and peers, Thompson consistently pushed the envelope with his antics and was given an early honorable discharge. Doug Brinkley, the literary executor of Thompson’s estate, had this to say in 'Gonzo: The Life of Hunter S. Thompson': “I think there is a misimpression that Hunter’s Air Force years were one of him just flipping off authorities. In truth, he was an integral part of what was going on on the base and was respected by superior officers and the enlisted men. He just got into a tangle with some of the rules of journalism.”

Before the wind cried Mary, the wind was hitting the face of guitar god Jimi Hendrix as he jumped out of airplanes in the Army’s 101st Airborne Division. It all came, like Thompson, after an option to spend time in jail or join the military after his arrest for joyriding in stolen cars.

Hendrix joined the Army in May 1961 and, upon completing his training and getting assigned to his unit, quickly gained a reputation from his command as a lackluster soldier—maybe a non-conformist at best. In less than a year his superiors were recommending his discharge from the Army.

One 1st Sgt. Louis Hoekstra wrote in a deposition, “Pvt. Hendrix plays a musical instrument during his off-duty hours, or so he says. This is one of his faults because his mind apparently cannot function while performing duties and thinking about his guitar.”

Hendrix would receive an honorable discharge soon after that and the Army’s problem child would soon carve out a nice career as a voodoo child.

After he was kicked out of the house by his infamously strict father (the same one who would murder him years later), vocal legend Marvin Gaye dropped out of high school and joined the Air Force. Like most people who join the military for all the wrong reasons, Gaye quickly became disillusioned with the service and feigned mental illness.

He managed to beat Hendrix’s short enlistment and was drummed out of the service in just eight months.

Out of all the troublemakers on this list, it would be hard to argue that any of them had a rougher start at life than American comedy god Richard Pryor. Aside from being a victim of sexual abuse at an early age, he was raised in his grandmother’s brothel after his alcoholic mother left him at ten. At 14, he found himself expelled from school.

The Army would almost seem like a safe escape after all of that. But quickly into his enlistment — while stationed in Germany — Pryor was imprisoned and discharged after two years of service for a physical altercation involving a white soldier who was overly amused by a racially charged scene in a film, according to a 1999 profile in The New Yorker.

Steve McQueen built his legend as a man who lived fast and hard, but for 41 days in the late 1940s, McQueen was sitting in a solitary cell after getting caught going AWOL from the Marine Corps to visit his girlfriend.

This isn’t surprising considering his legend was built on the fact that he lived life how he wanted to. But unlike the previously mentioned stars, McQueen finished his enlistment all the way through and even spoke highly of his time in service during his later years.

After the AWOL incident, the ship McQueen was on ran aground in the Arctic during a training exercise, launching several Marines and sailors into the water. McQueen jumped into the frigid water and saved the lives of five men, according to a Military.com bio.

Like Thompson and Hendrix, one of the most famous guitarists from the San Francisco counterculture movement ended up in the Army because of a stolen car. And like most of the people on this list, Jerry Garcia’s military experience was short-lived.

“At the time the only really available alternative was to join the Army, so I did that,” Garcia said in a 1972 interview with Rolling Stone. “I lasted nine months in the Army.”

He was discharged for “lack of suitability to the military lifestyle,” according to his official website.