Growing up, Hamza bin Laden had some big shoes to fill. His daddy, Osama, was a world-famous piece of human... 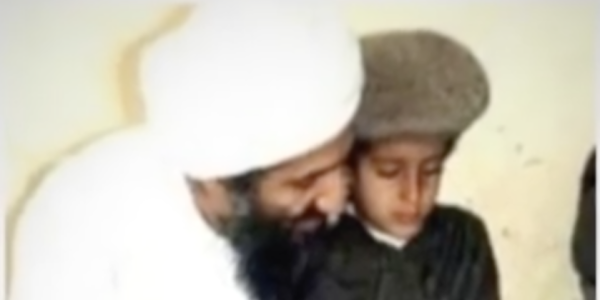 Growing up, Hamza bin Laden had some big shoes to fill.

Now, little Hamza is all grown up and determined to follow in his daddy’s footsteps. Last week, the prodigal son released a 10-minute audio message accompanied by footage of past terrorist attacks. In it, Hamza calls on followers to attack Jews, Americans, Westerners, and Russians, just as his daddy had done. “If you are able to pick up a firearm, well and good; if not, the options are many,” he says in the video, which was obtained by SITE Intelligence Group.

The recording is part of a series of videos that Hamza has been featured in recently, according to experts interviewed by CNN. In fact, it appears that he is now being groomed to become the new face of al Qaeda — because, of course, the old face of al Qaeda was pumped full of lead and then, presumably, devoured right off the skull by a pack of wild sea animals.

“He has been trying to copy his dad, and also to copy and repeat the messages and terminologies used by his dad in the past,” Ali Soufan, a former FBI agent who tracked al Qaeda, told CNN. “Hamza at this point is being prepared for senior leadership in al Qaeda, to play a role down the road in the leading the organization, and probably in unifying the global jihadi movement.”

Jihadists will probably recognize Hamza from his previous on-camera work. As a child, his father liked to include him in al Qaeda propaganda videos, in which he’d often appear holding his daddy’s automatic rifle and doing grown-up terrorist training the other big boys.

Always eager to make his father proud, little Hamza was quite the bookworm. While on house arrest in Iran after the Sept. 11 terrorist attacks, Hamza studied al Qaeda’s militant ideology and wrote letters to his father imploring him to allow him to “march with the armies of the Mujahadeen,” according to CNN. Unfortunately for Hamza, his dreams of waging jihad alongside his father never came true because of those big scary Navy SEALs.

Documents were found during the 2011 raid on Osama bin Laden’s compound in Pakistan that showed Osama wanted Hamza to join him in the trenches but that they had not yet been reunited. Which meant that Hamza’s brother, Khalid, who was killed at the compound on the night of the raid, got to have all the fun. No fair!

Don’t worry, little Hamza: you’ll probably get a gruesome chance at martyrdom like your kin, too.