Does Putin Have A Long-Range Climate Change Strategy?

I’m an older British veteran, living in America, teaching younger American veterans about climate change and about renewable energy, which... 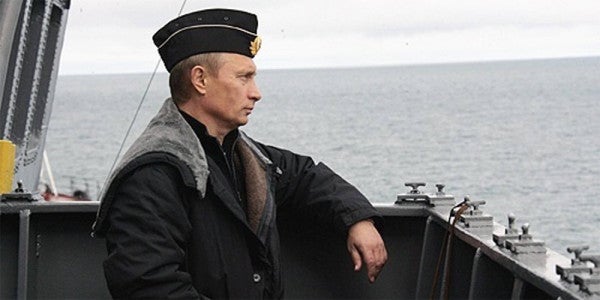 I’m an older British veteran, living in America, teaching younger American veterans about climate change and about renewable energy, which is the leading solution to climate change. I came about this career in a roundabout way. First I was a British working-class kid from one of those stone and brick British industrial cities, a knockabout brat who liked to fix motorcycles. I also liked to go hiking in the mountains with my friends during the school holidays. Then, thanks to fixing bikes, I was an aircraft engineering technician for the Royal Air Force (the “RAF”), the world's first, 100 years old this year, which led to five and a half years as a mountain rescue “troop” with their Mountain Rescue Service. That made me a military medic. So, I finished up with three MOSs for the price of one.

All that got me exposed to Americans, the “yanks” or “spams” as we called them — primarily half-crazy USAF pararescuemen or “PJs,” with whom we shared mountain training courses and camps and beer and whiskey; the mountains and their natural history led me eventually to the environmental movement. These led me to university in the U.S., advanced degrees in climate change-related research topics, working alongside the Forest Service, NOAA, and other federal agencies, and then by degrees back to engineering technology in renewable energy and climate change solutions, and college teaching. Now, in my “spare” time, I edit the RAF Mountain Rescue Service’s journal, run a student SAR team in my home state of Maine, and teach and think and write about climate change and renewable energy.

I guess you could say there are some recurrent themes in my life. What goes around seems to come around, go away for a vacation, and then come around again. Or maybe, Occam’s razor, I’m just stuck in a series of parallel ruts. Either way, I’m happy enough with how it all turned out. I get lots of American vets in my classes, all late 20-something kids, and they put our 18-year-old, regular college kids to shame. I’m pleased to be among military people again. Among dozens more, I’ve had a submariner, a paratrooper, an intelligence-er, a Green Beret, and a coastie. Currently I have an infantry officer and a female army medic in my courses. One year not so long ago, myself, an active duty Navy corpsman, and a former SEAL and SERE instructor all teamed up to make a three-day land SAR team leaders' course for our college and the state of Maine’s civilian SAR service. That was a blast.

One formative experience was when my old roommate became the senior rescue team leader for the Lockerbie air disaster in 1988. That was also a blast, but not the good kind. I was out of the U.K. and in the USA by then, for which I’m glad. I have enough bad memories of corpses and injured people from airplane crashes and climbing accidents, and I don’t need anymore. Some of my RAF rescue teammates that responded to Lockerbie finished up with PTSD. But I did realize from that one degree of connection to such an event that not only are these things connected in my life, they are also connected globally in the Great Game of geopolitics. Gaddafi is gone, but other monsters remain.

My current problem involves trying to figure out what one such monster, Vladimir Putin, has planned for an endgame with regard to oil, gas, and climate change. What is he up to? I’m not a spook, just a self-appointed academic wannabe that’s interested. There’s one question I can’t figure out the answer to. Why is he doing what he’s doing? In particular, why was it so important to him to suborn the U.S. political process to aid in the election of a half-wit, full-on, pro-oil, anti-climate policy candidate?

Putin is a lot of things, but he isn’t stupid. He has good scientists and good engineers working for him, and he probably isn’t so dumb as to ignore their advice. He surely knows that Russians will suffer as much or more from climate change as Americans or indeed anyone. Russia may not get hurricanes, but it does get droughts, wildfires, windstorms, and tornadoes, and many important cities are at or just above sea level.

I worried at this problem for a while and decided that he was just making the best out of the hand he’d been dealt and was using a short- and medium-term perspective on oil and gas sales – sell it now while we can, using our bought-and-paid for American politicians and lobbyists to help do so, then use the resulting proceeds to retool out of dependence on oil. This is more or less what the Saudis have been doing the last 10 years or so. It’s short-termer-ism, but what other choice does he have?

Then it dawned on me that he knows all this, and more, and has perhaps even incorporated climate thinking into his grand, grand strategy. Go figure: The Russian landmass contains massive territory that is currently too cold to support agriculture, but that has deep soil resources. Climate change will move everything north. Unlike North America, where we tend to run into mountains, muskeg, and the Canadian Shield’s hard geology when we head north, northern land and soil resources in Russia actually increase.

So this is the long-term endgame. Our agriculture, currently the world’s most important, will suffer and many of our cities will become untenable, especially the coastal cities exposed to sea level rise. But Russian land resources will improve. And on will come the new, newly enlarged Russian Empire. What fools we’ve all been taken for!

So I have this kid, this 3-year old, all-American daughter. She’s blond and spoiled rotten and the apple of my eye. Her mom is a Pennsylvanian German, her grandfather a Vietnam Veteran slowly dying of leukemia, her other granddad and all her uncles were British army squaddies and RAF airmen in National Service, and her paternal great grandfather was a British Tommy in both world wars. (That was some bad luck there, to be still in the reserves and just under 40 in 1939.)

My family paid their fair share of democracy’s price and more. How much will be left, if we don’t smarten up a little?