Steelers Army Vet: Everyone Got My Anthem Stance ‘Absolutely Wrong’

On Sept. 24, Pittsburgh Steelers starting left tackle Alejandro Villanueva walked out of the tunnel at the Chicago Bears’ Soldier... 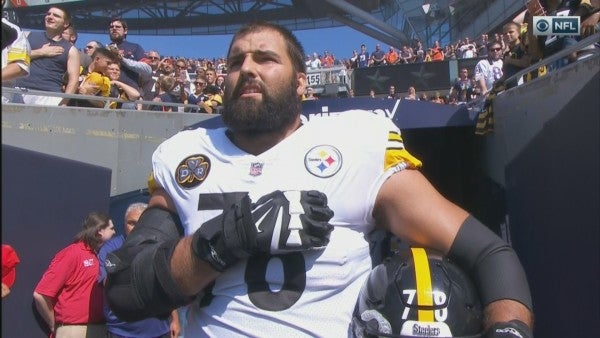 On Sept. 24, Pittsburgh Steelers starting left tackle Alejandro Villanueva walked out of the tunnel at the Chicago Bears’ Soldier Field for the pregame singing of the national anthem. The West Point graduate and former Army Ranger’s teammates lingered behind as he put his hand over his heart.

Some media outlets painted Villanueva as a defiant patriot and a hero, others as a defiant splitter of the team’s unified protest… except he wasn’t acting in defiance at all. Walking out onto the field and standing alone to the Star Spangled Banner, he says, was purely accidental.

It turns out that Villanueva had intended to stand with his team, but asked team captain Ben Roethlisberger if he could pop outside to check where the stadium’s U.S. flag was, so he could face it from the tunnel with his teammates. He stepped out of the tunnel, ahead of his teammates, and the music started. Walking back to rejoin them, he said, “would have looked extremely bad.”

Villanueva followed up by saying the “national anthem ordeal … out of control.”

Tomlin and Villanueva’s teammates voiced their support for him, even though his time in the tunnel — and the national spotlight — came as a surprise to them.

“People shouldn't have to choose,” Coach Mike Tomlin told CBS Sports. “If a guy wants to go about his normal business and participate in the anthem, he shouldn't be forced to choose sides.”

Tomlin added that the Steelers’ decision to stay in the tunnel was not simply to pick a side in former NFL quarterback Colin Kaepernick’s sideline practice of taking a knee as a way of protesting police violence and systematic racism against American minorities. After President Donald Trump suggested that NFL leadership take action against players who don’t to stand during the anthem, the Steelers decided to stay off the field for the song.

Rather than kneel in protest with Kaepernick or or stand in line with Trump, the team simply wanted to refrain from being a part of the conversation.

“We're not going to play politics,” Tomlin added. “We're football players, we're football coaches. We're not participating in the anthem today — not to be disrespectful to the anthem, but to remove ourselves from the circumstance.”

Despite what happened Sunday, Villanueva has mixed feelings about taking a knee for the anthem. He has previously stated that he empathizes with Kaepernick’s cause, according to the New York Times. However, he has also suggested that it may come off as demeaning to military veterans who have made the greatest sacrifices.

Villanueva has seen that firsthand. In 2011, he was awarded a Bronze Star in Afghanistan for attempting to rescue Pfc. Jesse Dietrich from a Taliban firefight in Kandahar. Despite getting Dietrich medevaced, he died anyway.

“Some men, some women sign up for this tough challenge and they have to do it for the flag,” Villanueva said in his postgame conference. “When I see a flag on the mission on the shoulder of a soldier, that reminds me that the guy's with me.