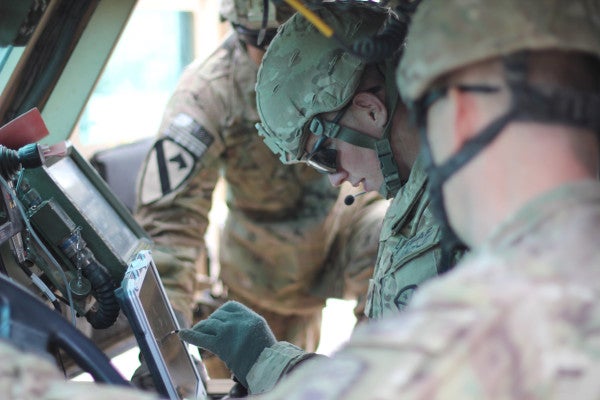 The folks down at Army Futures Command are all about fixing the problems of tomorrow, and their latest initiative is no different: They want to teach soldiers how to code so they can create and fix software anywhere, anytime.

Though the Army Software Factory was first announced back in July, on Thursday the Army announced it would be based at Austin Community College in Austin, Texas.

The program will allow soldiers and students in the Austin area to collaborate and create “fresh ideas to solve what are really old problems,” according to Gen. John “Mike” Murray, the head of Army Futures Command, established in the fast-growing technology hub of Austin in August 2018. At its core, the software factory — the first of its kind for the Army — will train soldiers and civilians admitted to the program on how to develop software to help address issues that the Army is facing.

Maj. Vito Errico, a co-director of Software Factory, told Task & Purpose in an interview that in Iraq and Afghanistan, it was “fairly commonplace” to have contractors and government civilians who worked with new technologies in-theater with soldiers. But that may not always be the case.

“If we think that that’s not going to be the case anymore, we must provide our soldiers with an ability to both diagnose these advanced technologies’ issues, as well as potentially code their own solutions without assistance from higher echelons or reach back to those contractors, contracted support, because they just simply might not have the ability to do it,” Errico explained.

Errico said that as the Army has been pushing for more digital talent, the team down at Futures Command realized that plenty of tech-savvy soldiers were already in the service who weren’t being used properly.

“You have a bunch of lieutenants out there with computer science degrees that are infantry officers … that have never used their degree,” Tirzah Van Damme, who handles marketing and recruiting for the software factory, told Task & Purpose. “And same on the enlisted side, there are a ton of people with degrees in this set that aren’t able to use it, so it’s super exciting for them.”

Now, soldiers and Army civilians will have the opportunity to volunteer to join the software factory, which will likely keep them in Austin, Texas for three years while they go through the training program.

Every six months, starting in January, a new group of 30 soldiers who have been selected will arrive in Austin to start the program. That pace will continue until they have around 200 soldiers on board, Errico said.

After their first six months, soldiers will be assigned to different disciplines — such as product manager, application engineers, platform engineers, and others — and then be paired with “industry experts” to begin “coding solutions on modern Army problems,” Errico explained.

“Through that pairing experience for another six months, they’re not only learning from their trainer, but they’re learning on a real-world problem as opposed to, you know, a fake data set or something like that.”

After a year of training alongside an industry partner, the soldier can then essentially become the trainer and help the next group of soldiers coming through. They’re then expected to stay at the software factory for another two years to take on a more senior role and train others; the goal is to avoid losing “the institutional knowledge” that they’re building when soldiers leave for other duty stations.

And if working at the Army's hub down in Austin (where people go by their first names, not their ranks, and uniforms are a thing of the past) isn’t enough, an Army Futures Command official told Task & Purpose that people participating in the program “will have, at a minimum, associate’s degrees in information technology or applied computer science, up to the potential for a bachelor’s degree.”

That piece of the puzzle is still being finalized, but the official said they expect to announce it soon.

The software factory is already showing results: Two soldiers who were a part of the pilot program have created an app that helps streamline the process of getting equipment ordered and prepared for brigade combat teams.

The Army started outfitting brigade combat teams with a common authorized stockage listing (CASL), which is essentially a stock of equipment that is meant to be able to deploy alongside units.

The app that Zimmer and his partner Staff Sgt. Josh Neighbors created will help automate the process of replenishing the equipment after a unit uses it. What was originally a “very manual process” now goes through the app to sort and prioritize orders, and help soldiers get what they need faster.

Zimmer said that one side effect of the app is “increasing morale” because soldiers aren’t working “seven days a week” or working until 10 o’clock at night to fulfill an order.

“We were able to directly impact the lives of the soldiers that are using this tool by building efficiency,” he said.

While Zimmer and Neighbors won’t be sticking around for the start of the software factory in January, they both said they’d encourage soldiers to “absolutely” join the program if they get the chance.

Related: The scooter-riding youths of Austin are proving to be key to Army modernization