For almost 1,000 Army recruits, their enlistment on Wednesday was out of this world— literally 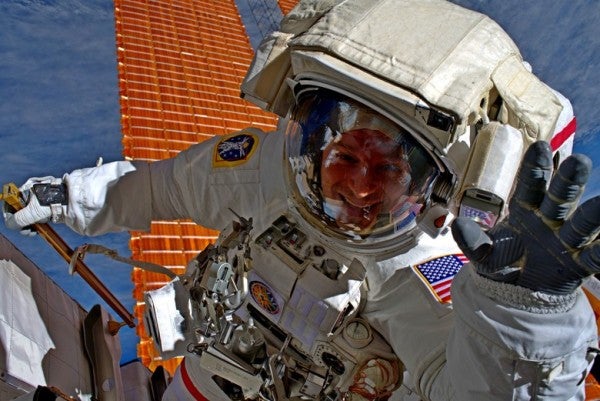 For almost 1,000 Army recruits, their enlistment on Wednesday was out of this world— literally.

On Wednesday afternoon, Col. Andrew Morgan — an Army surgeon-turned-NASA astronaut — administered a nation-wide oath of enlistment from the International Space Station, the first ever enlistment ceremony of its kind.

Morgan was connected via a broadcast from the ISS to over 150 locations where recruits were waiting to take their next step into service, including the Space Center Houston in Houston, Texas.

Morgan also took a few minutes to answer questions from the future troops and give them some advice: When it gets tough, keep pushing.

“All things that are worth doing are hard,” Morgan said. “And as you set off on this journey, you will at some time hear that voice in your head that tells you, 'Maybe this isn’t for you, you should quit now, there are so many other more comfortable ways to go about life than this.' And that is your signal that what you’re doing is worth doing.

“You will hear that and you need to suppress that and drive on. I experienced that multiple times in my career, and it’s turned out to be extremely rewarding.”

Amber Cobena, 26, is one of the new soldiers who attended the ceremony at Space Center Houston. She told Task & Purpose it was an “honor to be a part” of making history with the ceremony.

With eight generations of military service from both sides of her family — almost all Army, except for one Marine — Cobena, a Houston native, said she wanted to “continue the tradition.”

“I’ve thought about the military for a while and I just never jumped on it,” Cobena said. “So if anyone is feeling resistant to doing something that they’ve been thinking about for a while, just go ahead and go for it.

“If your dreams don't scare you then they're not big enough.”

Watch the enlistment ceremony below: