This gives us unlimited hours of practice without spending money on materials and exposing students to hazards.” 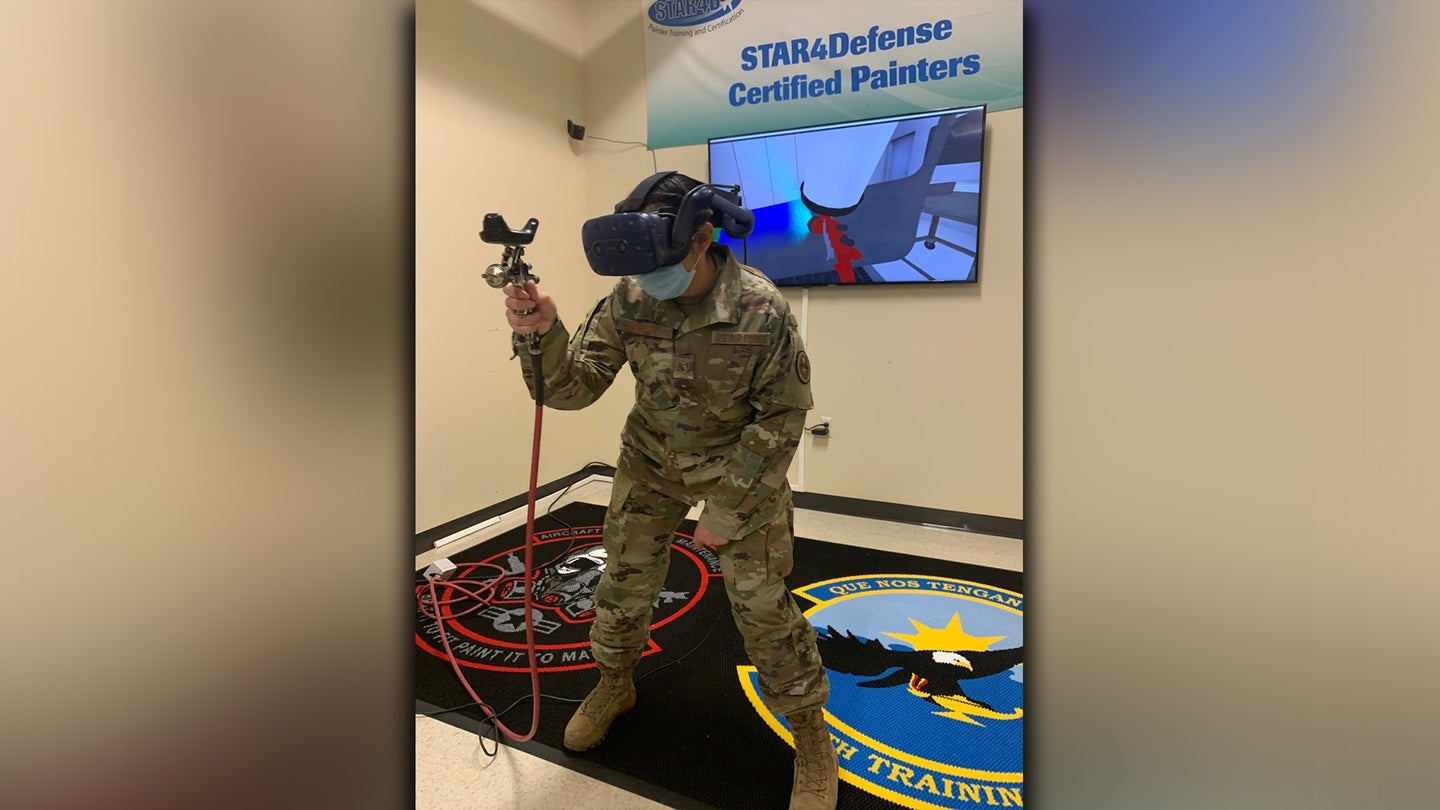 One thing is certain about the U.S. Air Force: they sure love a good virtual reality simulator. The branch uses virtual reality to prepare airmen for a range of jobs such as piloting aircraft, maintenance, aerial refueling, emergency medicine, policing and even suicide intervention. Now Big Blue is putting the full force of its technological might into the greatest national security challenge facing America … teaching airmen how to paint aircraft.

That’s right, in a press release on Monday the Air Force proudly unveiled its latest training simulator, which gives airmen a chance to spray just enough paint to adequately cover the aircraft, but not too much, which would add unnecessary weight. As silly as it sounds, aircraft paint actually plays an important role protecting the machine from corrosion, which one airman explained is the leading cost of maintenance repair in the Air Force.

“Properly applying paint is vital to the protection of metals used in aircraft construction,” said Master Sgt. Juan De La Rosa, of the 318th Training Squadron at Joint Base San Antonio-Lackland, Texas, in the press release. “Too much paint and you add weight to the aircraft, not enough paint and you run the risk of corrosion developing.”

The simulator provides immediate feedback by marking areas in green when the correct amount of paint is used, blue when more paint is needed, and red when too much paint is applied. While the Air Force has used different versions of paint simulators in the past, the real-time feedback on this one is a level-up in terms of training efficiency, the press release explained.

Part of the reason the Air Force loves VR simulators is that it lowers the cost of training airmen and allows the service to train more specialists with fewer instructors, which is a particularly acute problem in the pilot community. That makes sense when you’re talking about the cost of fuel, maintenance and man hours for each pilot training sortie, but how practical was it to spend $30,000 developing paint simulator software? The press release did not specify how much money the simulator might save in the long run, but De La Rosa said it could be a bargain.

“The upgrade of the system will help us take it anywhere, anytime with minimal effort,” he said. “This gives us unlimited hours of practice without spending money on materials and exposing students to hazards.”

The portability of this painting simulator is another key feature, especially during the coronavirus pandemic when airmen could not access in-person training so easily. The simulator kit is small enough that it can be carried around in a hard case and be set up in just a few minutes.

“I can’t pick up a sheet metal shop and take it with me, but this helps us take our paint booth with us anywhere,” De La Rosa said.

Now De La Rosa and Staff Sgt. Julia Reyna, 318th Training Squadron Structures and Corrosion Instructor, are taking the simulator on tour: in a month they will deploy to U.S. Southern Command in a mobile training team to spread the good word of virtual reality painting.

“Putting you in that setting is going to help you become more proficient in what you do,” Reyna said. “It’s all about getting comfortable holding that paint gun and developing that muscle memory.”

That may be well and good, but now I can’t wait for the press release titled: Air Force to use simulator simulation to train airmen on using simulators.

Related: The Air Force is using virtual reality to fight its suicide epidemic