He saved the lives of five US troops. Now this Afghan interpreter is an American citizen

Janis Shinwari is credited with saving the lives of five U.S. service members during his eight years serving as an interpreter. 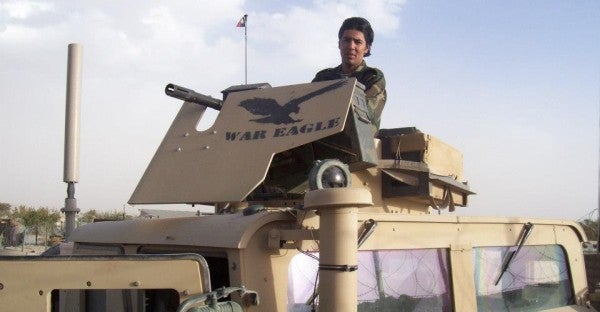 An Afghan interpreter who saved the lives of five soldiers over his years of service to the U.S. military officially became an American citizen on Monday, according to media reports.

Janis Shinwari began working for the U.S. military in 2004, NPR reported. Four years later, he came to the rescue of Army Capt. Matt Zeller when his unit was ambushed in eastern Afghanistan.

“I saw Matt Zeller, that he was alive in a ditch and there were two Taliban behind him to kill him,” Shinwari told NPR. “I shot the two Taliban and I saved Matt Zeller’s life.”

In total, Shinwari is credited with saving the lives of five U.S. service members during his eight years serving as an interpreter, Ken Cuccinelli, the acting deputy secretary for the Department of Homeland Security, told Fox News.

It took Shinwari three years to obtain a visa that finally allowed him to arrive in the United States in 2013, NPR reported. During that time, he was on the Taliban’s kill list and he lived in fear.

Shinwari is one of the lucky ones. More than 18,000 other Afghan interpreters are still waiting for visas, according to NPR. The program has been rife with delays and has issued few of the visas that have been allocated.

A State Department report recently found that one reason why it takes so long for Afghan interpreters to get visas is that only one person oversees the entire program, according to Fox News.

The case of another interpreter named Sakhidad shows the cost of bureaucratic indifference to Afghans who risk their lives by helping the U.S. military.

He applied for a visa in 2011 after serving with the U.S. military. Four years later – with his application still being processed – the Taliban abducted, tortured, and murdered him.

Shinwari is a co-founder of the non-profit group No One Left Behind, which helps bring Afghan and Iraqi interpreters to the United States, Fox News reported.

“It took three years to get my visa,” Shinwari told Fox News. “This process is getting, like much longer and most of them, [applicants] they got killed by Taliban waiting for their visa.”