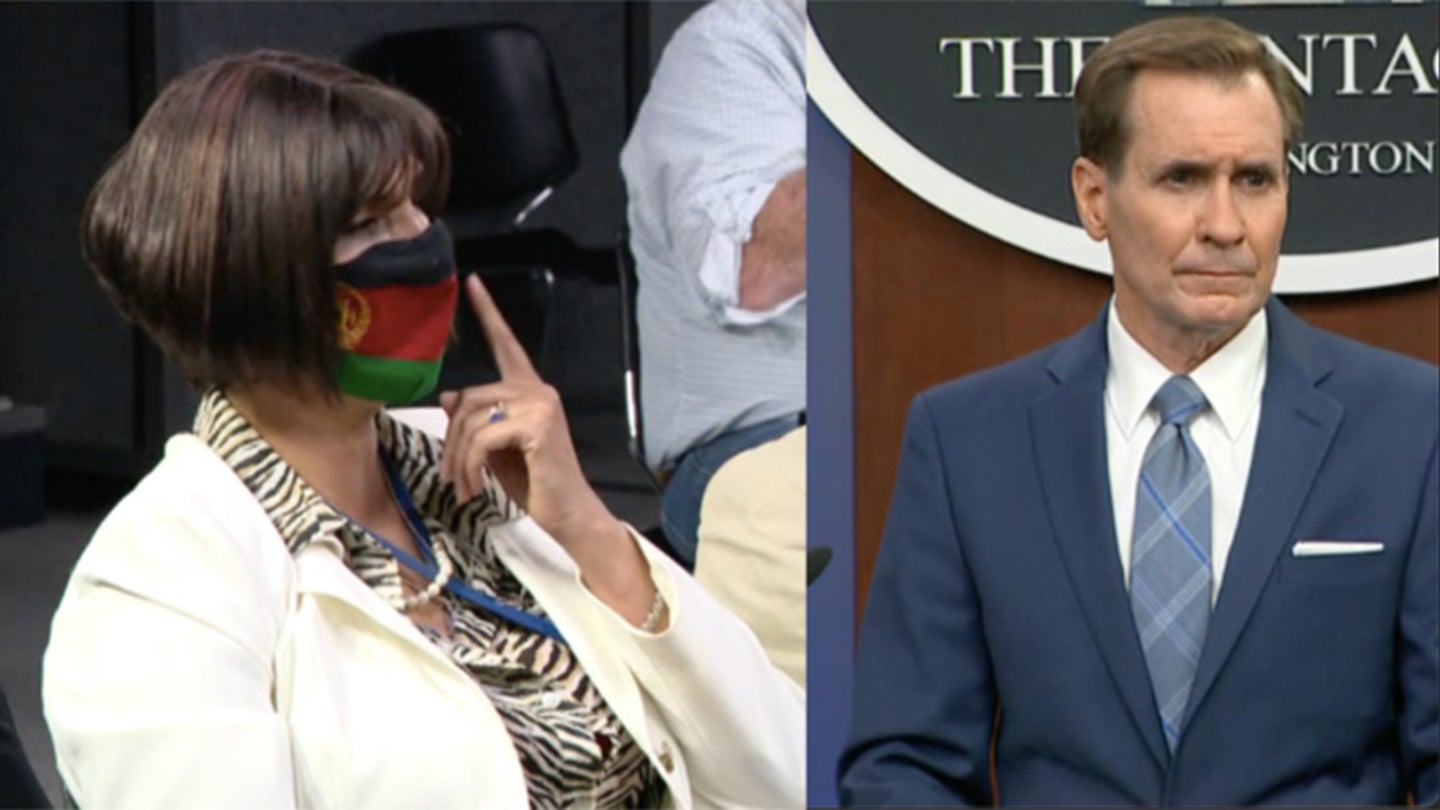 Afghan reporter Nazira Karimi points to her face mask of the flag of the former Islamic Republic of Afghanistan during a press briefing with Pentagon spokesman John Kirby on Aug. 16, 2020 (Screenshot via CNN).
SHARE

An Afghan journalist who survived harassment, death threats and violence covering the Taliban in the 1990s held the Pentagon’s feet to the fire on Monday when she asked press secretary John Kirby where Ashraf Ghani, her country’s former president, had fled. Karimi also used the opportunity to express her frustration at the Taliban’s swift return to power.

“I am from Afghanistan and I am very upset today, because Afghan women didn’t expect that overnight all the Taliban came,” said journalist Nazira Karimi in tears at a press briefing on Monday. The briefing occurred two days after Ghani fled Afghanistan and a day after the Taliban seized control of Kabul, the capital city, marking victory in their 20-year war against the Afghan government and the United States.

“They took off my flag,” Karimi said, pointing to her face mask, which bore the black, red and green banner that the country had flown since 2004. “This is my flag … everybody is upset, especially women.”

Karimi asked Kirby where Ghani had fled, saying that he had an obligation to “fight for us people.” But she also expressed her frustration with the situation faced by Afghan women in general. The journalist began her career covering the Taliban’s brutality against Afghan women and girls, according to the Tahirih Justice Center, a non-profit that works to protect immigrant women and girls fleeing violence.

“At one point, during an interview for the BBC, she asked a Taliban spokesman about whether the Taliban would allow women to work,” the center wrote in a 2015 statement honoring Karimi. “In response, he detained her for three hours, after which he told her to never come back and stay at home.”

Now that the Taliban are back in power, it likely means a return to how things were in the 1990s, which means undoing much of the progress women have made in the country since the United States invaded in 2001. That progress includes holding 27 percent of the seats in the former government’s House of the People; going to school; being able to drive cars; serving in the military and, for one woman, becoming mayor of a provincial capital.

At one point during her remarks, Karimi forgot the original question she meant to ask Kirby, which was where had Ghani fled. But in the middle of her comments seemed to be a broader question: what happens now?

Kirby said he could not speak for Ghani or where he had fled to, but he emphasized that he understood Karimi’s pain.

“Let me say with all respect that I understand and we all understand the anxiety and the fear and the pain that you’re feeling,” he said. “It’s clear and it’s evident.”

Nearly everyone at the Pentagon has a personal connection to Afghanistan, Kirby added.

“Everything that you’re seeing in the last 48 to 72 hours is personal for everybody here at the Pentagon,” he said. “We too have invested greatly in Afghanistan and in the progress that women and girls have made politically, economically, socially.”

For the moment, the Department of Defense is focused on doing “the best we can for those Afghans who helped us,” Kirby said. “We are going to be focused on doing what we can to honor that obligation to all those who helped make all that progress possible. Because by helping us, they helped us help you.”

The U.S. government has a long way to go to honor that commitment. Kirby estimated on Monday afternoon that there are 22,000 Afghans still in need of evacuation, and so far the U.S. government has taken 2,000 out of the country. He estimated that the airlift capacity should grow to 5,000 people per day, according to Air Force Magazine.

As Kirby pointed out, the evacuation is focused on helping Afghans who worked with the U.S. government during the war, either as interpreters or in another capacity. That still leaves the 38 million Afghans who now have to readjust to life back under the Taliban. For those people, Kirby could offer only sympathy.