Are US military aircraft really as broken as a government watchdog says they are?

"The mission capable rate for some of these airplanes is like 60%, but 100% of the flying schedule is filled. How is that possible?" 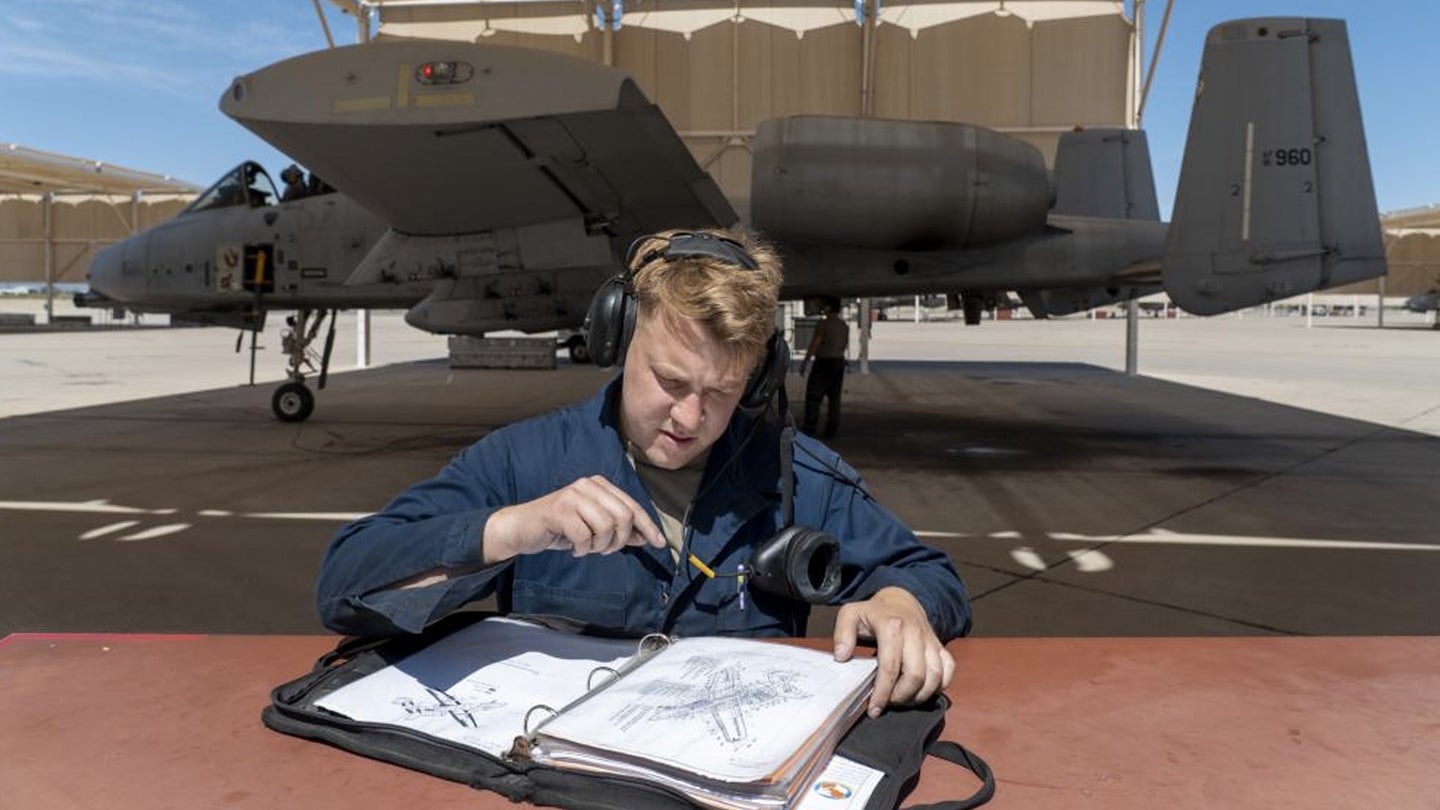 A new report from Congress paints a dire picture of the state of U.S. military aviation, revealing that the services have not been able to meet their mission readiness goals for most fighters, transports, bombers, helicopters and other aircraft over the past 10 years. But some experts say that the “mission capable” statistic the report hinges on is not an adequate tool for measuring whether U.S. military aircraft can respond to a crisis.

Released on Thursday, the Government Accountability Office report found that only four of the military’s 49 types of aircraft met their annual mission readiness goals in a majority of years from fiscal year 2011 to fiscal year 2021. Even worse, 26 aircraft types (more than half the total) did not meet their annual mission capable goal in any fiscal year. Many military aircraft are designed to perform more than one mission, so the GAO defined the term “mission capable” as “the percentage of total time when the aircraft can fly and perform at least one mission.”

That means over the past 10 years, according to the GAO, most of the military’s fixed and rotary wing aircraft could not perform any of its missions as often as the services want, despite the U.S. government spending about $54 billion in fiscal year 2020 alone on operating and support costs for the 49 aircraft reviewed in the GAO report.

“Operating and support (O&S) costs historically account for approximately 70 percent of an aircraft’s total life-cycle cost … and include costs for repair parts, depot and field maintenance, contract services, engineering support, and personnel, among other things,” the GAO wrote. “Weapon systems are costly to sustain in part because they often incorporate a complex array of technical subsystems and components and need expensive repair parts and logistics support to meet required readiness levels.”

Why are so many aircraft not mission capable, despite the money invested in keeping them in good repair? Service officials who spoke with the GAO blamed three problems: aging aircraft; maintenance issues; and the lack of adequate infrastructure for supplying spare parts. To figure out how to fix those problems, the Air Force and Navy aim to complete reviews of the sustainment systems for their major weapon systems by 2026, the GAO wrote.

But in the meantime, chronic issues like aircraft being older than dirt, not having enough replacement parts, and being stretched thin over a wide range of national security priorities do not appear to be going anywhere soon.

“Many of the aircraft we reviewed are facing one or more sustainment challenges related to the age of the aircraft, maintenance constraints, and supply support,” GAO wrote. “According to program officials, these challenges have an effect on mission capable rates and the costs required to sustain those aircraft.”

The report is the latest grim news about military aircraft readiness rates. The GAO has written extensively about the problem since at least November 2020, when it found that mission capable rates were far from what the services hoped they would be from fiscal year 2011 to fiscal year 2019.

Not much has changed since the 2020 report, and the challenges regarding aircraft age, maintenance problems and part supply issues remain in place. But while officials across the military share the GAO’s concern for those issues, some have criticized the use of mission capable rates as a meaningful statistic to analyze how prepared military aircraft are to respond to a crisis.

For example, then-Air Force Chief of Staff Gen. David Goldfein said in 2019 that the readiness of a fighter fleet is more than just how many fighters can fly on a certain day.

“The fastest way for me as chief and for us as the Air Force to increase the [mission capable] rate is to stop flying,” Goldfein told Air & Space Forces Magazine. “If I gave that airplane to maintenance, bought them the parts, they’re going to get that MC rate high. But I’m not going to have people trained, I’m not going to have folks airborne, so my overall performance is going to go down.”

Instead, the general proposed that leaders consider how quickly Air Force members and aircraft can deploy to meet a combatant commander’s demand.

“How many force elements do we have — fighters, bombers, tankers — across all of the Air Force, and how are we doing relative to the time all of those forces need to be ready,” he said.

For example, the GAO report found that the Air Force B-1 bomber and F-22 fighter are some of the least mission-capable aircraft in the military’s arsenal, but those aircraft are routinely sent on snap deployments to places like Diego Garcia, Guam and Japan as a deterrence to potential adversaries in the Indo-Pacific region. How are such deployments possible despite the GAO’s dire findings?

One expert who pushed back on the GAO report said that it does not capture the nuance required to generate insightful analysis in the complicated world of military aviation.

“When you’re dealing with aircraft metrics, you are only seeing the above-water line of the iceberg,” said Mike Benitez, a retired Air Force officer and founder of The Merge, a defense newsletter. “There are so many more things that tell a more whole story … without a full picture understanding of it, you can’t really draw the right conclusions.”

Part of the problem is a lack of clarity in what counts as a mission. For example, in its most recent report, GAO refers to the F-22 as having two primary air-to-air focused missions (offensive and defensive counter-air) and one secondary air-to-ground mission. The jet “would be considered mission capable if it could fulfill only one of these missions,” the agency wrote.

That sounds clear-cut, but air-to-air and air-to-ground missions can take many forms. For example, the GAO noted that the most troublesome aspect of maintaining the F-22 is its low observable technology, which keeps the jet hidden from radar. However, even if its low observable profile were compromised, the F-22 technically could still rumble on as a non-stealthy air-to-air fighter just like its predecessor, the F-15. Similar questions apply to non-stealthy fighters.

“If you have a fighter jet, and you have a radar, and the radar breaks, that’s very binary: you will not take the jet and go fly if it does not have a radar, because there is no mission it can do,” Benitez explained. “But if you have an electronic warfare system that is broken, then maybe you can do 80% of your other missions and still get pretty good training in, so you go fly it.”

It is similar to owning a used car, he added. If the water pump goes out, then the car cannot drive. But if the passenger side power window cannot come down, the car can still drive. Military aircraft fly all the time with problems like that, so the distinction between “not mission capable” and “not flyable” is one that can be lost in the term “mission capable,” Benitez said.

“If you go look at the flight schedule, the mission capable rate for some of these airplanes is like 60%, but 100% of the flying schedule is filled. How is that possible?” he added. “The aircraft is not going to sit there waiting on parts if it is a safe, flyable aircraft that can do something.”

The underlying causes that the GAO lists are very much a problem that service officials have acknowledged for years. These include delays in acquiring replacement aircraft; unexpected repairs and replacement parts; delays in depot maintenance; a shortage of trained maintainers; parts shortages and diminishing manufacturers to make more parts. Diana Maurer, the director of defense capabilities and management for the GAO, said the military has been dragging its feet on keeping Congress informed of its efforts to review how the services sustain their major weapons systems. Not only was it going to take years for the Air Force and Navy to complete those reviews, but the branches also were not positioned to tell Congress what they were going to do to fix the problems found in the reviews.

“[W]e think it’s important for the Air Force and the Navy to complete these congressionally required sustainment reviews with a greater sense of urgency,” Maurer told a GAO podcast in June. “It’s not enough to report on the problems to Congress. It’s also important to find solutions and report back to Congress.”

Hopefully, that will help lead to what taxpayers want: less money to pay for aircraft that are capable of more missions. A lot more missions.