The Pentagon launched a propaganda campaign in Syria on March 16, in which an Air Force F-15E strike fighter dropped... 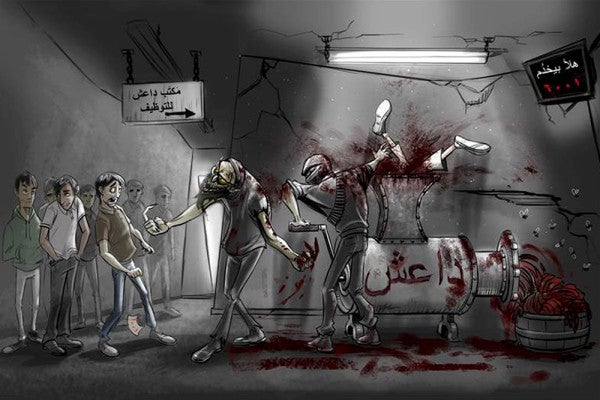 The Pentagon launched a propaganda campaign in Syria on March 16, in which an Air Force F-15E strike fighter dropped 60,000 leaflets over the city of Raqqa, the Islamic State’s de-facto capital in Syria. The grisly flyers — which look like something out of a graphic novel by Frank Miller — show a monstrous-looking Islamic State member ushering frightened recruits into a recruiting center, which is in fact a giant meat grinder.

Yeah, the Pentagon isn’t known for its subtlety. The flyers are aimed at creating fissures among Islamic State fighters and discouraging new recruits from staying with the extremist group.