6 Military Leaders Who Could Run For President In 2016

There’s a troubling trend in American politics — the absence of military experience in our leaders. Many of America’s 44... 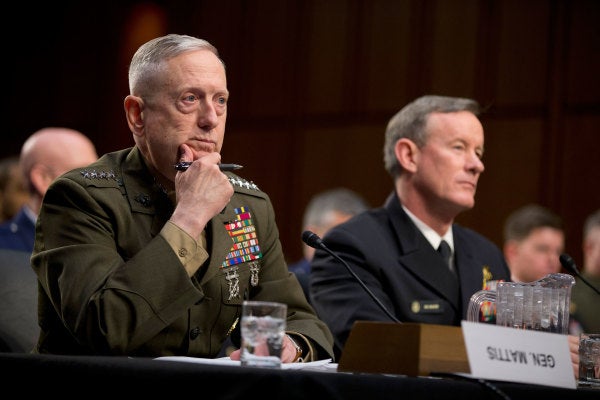 There’s a troubling trend in American politics — the absence of military experience in our leaders. Many of America’s 44 presidents and commanders in chief were career military men, starting with Gen. George Washington and reaching a peak with a string of former Union Civil War leaders during reconstruction. But America hasn’t had a career military leader in the White House since President Dwight Eisenhower in 1960, and hasn’t had a president with active military experience in more than 20 years since President George H.W. Bush, a former World War II pilot with a heroic record, who lost re-election in 1992.

The absence of military leaders on the highest American political stage isn’t for lack of qualifications. Former Chairman of the Joint Chiefs of Staff retired Gen. Colin Powell toyed with pursuing the nomination as a Republican in 1996, and retired Army Gen. Wesley Clark sought the Democratic nomination in 2004.

Alas, however, military service is just not a quality we demand in our leaders. As speculation abounds about who will succeed President Barack Obama in 2017, no one in the prospective field has any military experience, but for one exemption on this list. But these are not the only people who could conceivably seek the presidency.

Here, in no particular order, are six names who could stage a run for the presidency. The former military leaders listed here; who happen to be men, but cut across demographics of background, nature of service, and rank; could for various reasons find a place in a presidential primary. Some could be viable candidates, others could run for political reasons. It’s lamentable that there isn’t more of a public appetite for leaders with military experience, but it doesn’t mean we can’t inject qualified military leaders into a conversation about our next presidential election.

McChrystal served as an airborne infantry officer in Special Forces and Ranger units, as a three-star, he served as the commander of the secretive Joint Special Operations Command. Once promoted to four-star general, he commanded all coalition forces in Afghanistan.

Former Secretary of Defense Robert Gates described McChrystal as, “perhaps the finest warrior and leader of men in combat I had ever met,” in his 2013 biography.

McChrystal resigned and retired in scandal in 2010, but let’s be clear about the nature of that scandal. McChrystal’s aides made unflattering remarks about the Obama administration to a Rolling Stone reporter. That sort of thing could endear him to conservative voters, along with his stellar military record.

In retirement, McChrystal has founded a popular consulting firm, taught international relations at Yale University, and been vocal about domestic issues, like the need for national service.

He’s presently in the midst of a highly publicized book tour for his latest book, “Team of Teams,” on leadership.

The outgoing commander of U.S. Pacific Command, Locklear has recent experience commanding U.S. forces in high-profile operations and commanding a strategically vital unified combatant command. Locklear served alongside Army Gen. Carter Ham commanding forces in the American-led intervention in Libya in March 2011. From there, he was appointed commander, U.S. Pacific Command, overseeing the Obama administration's strategic pivot to the Pacific region. Locklear’s area of operations includes China, the Korean Peninsula, India, Australia, and Japan. In his tenure, he has overseen tense relations in the region and multiple instances of disaster relief.

In a move that could endear him to Democratic voters, in March 2013, Locklear gave to students at Harvard and Tufts universities that made national news when he described climate change or global warming as his biggest worry.

“People are surprised sometimes. You have the real potential here in the not-too-distant future of nations displaced by rising sea level,” Locklear said. “Certainly weather patterns are more severe than they have been in the past. We are on super typhoon 27 or 28 this year in the Western Pacific. The average is about 17.”

Though rumored to be in consideration for chairman of the Joint Chiefs of Staff, that nod went to Marine commandant Gen. Joseph Dunford. Locklear has already applied for retirement, and his replacement at PACOM should be announced soon.

This one is less speculative. Webb, a former secretary of the Navy and one-term senator from Virginia, has formed an exploratory committee and is likely running for president as a Democrat.

In 2006, Webb earned a seat to the Senate by ousting Republican incumbent George Allen. He spend just one term in office, but is credited with ushering through a historic piece of legislation during that time — the Post-9/11 G.I. Bill. Webb had switched parties for the election; he served as secretary of the Navy and as an assistant secretary of defense during the Reagan administration.

He’s a war hero; as a first lieutenant in Vietnam in 1969, Webb earned the Navy Cross, the Marine Corps’ second-highest award for valor. He completed his four years of service in 1972, walking away as a captain with two Purple Hearts and two Bronze Stars in addition to the Navy Cross.

West served one term in the U.S. Congress representing Florida’s 22nd congressional district from 2011 to 2013. He was an immediate darling of the Tea Party movement — a tough talking career military man who is polemically critical of President Barack Obama.

West has a troubled military record. Deployed in 2003 to Iraq as commander of 2nd Battalion, 20th Field Artillery Regiment, West was stripped of his command and forced to retire from the Army after an incident where he beat a detainee and unlawfully fired his weapon near the man’s head.

As a congressman, West lasted just a single term. Redistricting forced him to run for the 18th congressional district instead, and his brand of politics proved too polemic for him to survive a presidential election turnout. West was narrowly ousted by a then 29-year-old political novice, Patrick Murphy, who ran and won largely as a sensible alternative to West.

Since losing his congressional seat, West has remained a vocal critic from the far right, including working as a Fox News contributor. He has maintained the high level of visibility he enjoyed as a member of Congress. He wouldn’t stand much of a chance in the crowded Republican field, but a presidential run could boost his brand and allow him more of a foothold on the national stage.

A former four-star Navy SEAL, McRaven is the real deal. He retired in 2014 as commander of U.S. Special Operations Command. He had previously commanded Joint Special Operations Command, and was the forward commander for the Navy SEAL raid that killed Osama bin Laden in 2011, an operation he was pivotal in planning and executing. From Jalalabad, Afghanistan, McRaven oversaw the operation and relayed information back to the White House situation room.

Last year, McRaven dismissed speculation that he could be the vice presidential candidate for former Secretary of State Hillary Clinton, the Democratic frontrunner. Those rumors, his well-respected legacy as a flag officer, and his current role in higher education, would make him an intriguing political player.

Mattis is absolutely adored by Marines, who have been half joking and drafting the legendary general to run for president for the past few years. In 2012, the Marine Corps Times covered a write-in campaign for the general, who is affectionately nicknamed “Mad Dog.”

Mattis retired in 2013, as commander of U.S. Central Command, the unified combatant command responsible for North Africa, the Middle East, Afghanistan, and Pakistan. Prior, he commanded I Marine Expeditionary Force, 1st Marine Division during the Iraq War, and 7th Marine Regiment during the initial invasion of Afghanistan following the Sept. 11 attacks.

Mattis is known and loved not just for his record and brilliance as a wartime general, but for his penchant for tough talk and no-nonsense. He once famously told a group of Iraqi tribal leaders prior to the surge that, “I come in peace. I didn’t bring artillery. But I’m pleading with you, with tears in my eyes: If you fuck with me, I’ll kill you all.”

In another incident, Mattis told a panel in San Diego that it was “fun to shoot” Taliban fighters.

“You know, guys like that ain't got no manhood left anyway. So it's a hell of a lot of fun to shoot them,” Mattis said. “Actually it's quite fun to fight them, you know. It's a hell of a hoot. It's fun to shoot some people. I'll be right up there with you. I like brawling.”

In the two years since his retirement, Mattis has been teaching at Stanford and Dartmouth universities and has been an active voice on national security, military, and veterans issues.