In the late ‘90s, Disney’s blockbuster “Mulan” was receiving rave reviews. It was the ninth of 10 films Disney produced... 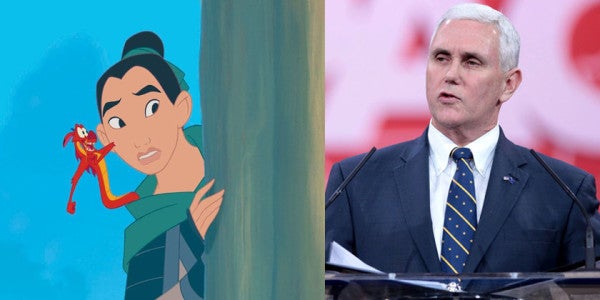 In the late ‘90s, Disney’s blockbuster “Mulan” was receiving rave reviews. It was the ninth of 10 films Disney produced that decade to resurge its animation studio.

Famed film critic Roger Ebert called it “an impressive achievement, with a story and treatment ranking with ‘Beauty and the Beast’ and ‘The Lion King.’”

Time Magazine’s Richard Corliss wrote, “What's terrific about Mulan is its reaching for emotions that other movies run from: family love and duty, personal honor and group commitment, obedience and ingenuity.”

And somewhere in Indiana, future governor and vice presidential candidate Mike Pence saw the film with his daughter for Father’s Day in 1999 and hated it.

Pence, then a conservative radio host who described himself as “Rush Limbaugh on decaf,” wrote an op-ed on his radio show website about the film in 1999 where he claimed the whole film was an attempt by Disney to influence the debate on women in combat.

“Obviously, this is Walt Disney’s attempt to add childhood expectation to the cultural debate over the role of women in the military,” Pence wrote in the op-ed first reported by Andrew Kaczynski with BuzzFeed News.

He likened the social effect Mulan could have on women in the military to what “Bambi” did to deer hunting.

“I suspect that some mischievous liberal at Disney assumes that Mulan’s story will cause a quiet change in the next generation’s attitude about women in combat and they just might be right,” Pence wrote. “(Just think about how often we think of Bambi every time the subject of deer hunting comes into the mainstream media debate.)”

The poem tells the story of Hua Mulan, a woman whose family was called upon to provide one man to serve in the military to protect China from its invaders. Her father, however, was too old, and her brother was still a child. And so Hua Mulan impersonated a man and served honorably in the military for 12 years, before returning home to her loving family and revealing her true identity to her shocked comrades.

I wonder if Pence also believes “mischievous liberals” at Disney came up with “Pocahantas” to encourage interracial marriage.