Trump Tells ‘60 Minutes’ That Mattis ‘May Leave’ The Pentagon

President Donald Trump has stoked fresh speculation that Defense Secretary James Mattis could be leaving his administration. During an interview with... 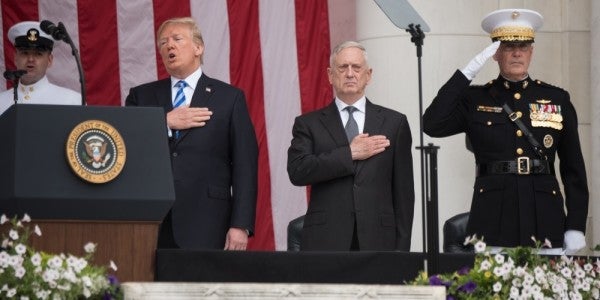 During an interview with “60 Minutes” that will air on Sunday night, the president said he is unhappy with some members of his cabinet and he has “people on standby that will be phenomenal.”

Trump was noncommittal when host Leslie Stahl asked him directly if Mattis will depart as defense secretary.

WILL MATTIS LEAVE? “General Mattis is a good guy. We get along very well. He may leave. I mean, at some point, everybody leaves,” President Trump tells Lesley Stahl for @60Minutes https://t.co/kYresbc0JT pic.twitter.com/3Rq8rVjb0G

“Well, I don’t know,” the president replied. “He hasn’t told me that.”

“Do you want him to leave?” Stahl pressed?

When asked about Trump’s comments, a Pentagon spokesman sent Task & Purpose a statement that did not address how much longer Mattis might be defense secretary.

“Secretary Mattis is laser-focused on doing his job — ensuring the US military remains the most lethal force on the planet,” said Army Col. Robert Manning.

Spokespeople for the White House did not immediately return Task & Purpose’s requests for comment on Sunday.

For months, Mattis has been dogged by persistent stories in the press that he will leave the Pentagon soon, which he has dismissed as rumors. He also unequivocally denied that he ever disparaged Trump, as Bob Woodward wrote in his book “Fear,” about the Trump administration.

“In serving in this administration, the idea that I would show contempt for the elected commander-in-chief, President Trump, or tolerate disrespect to the office of the President from within our Department of Defense, is a product of someone’s rich imagination,” Mattis said in a Sept. 4 statement.

UPDATE: This story was updated at 12:05 p.m. on Oct. 14 with a statement from Pentagon spokesman Army Col. Robert Manning.