Oh my sweet Jesus this sandwich is good. 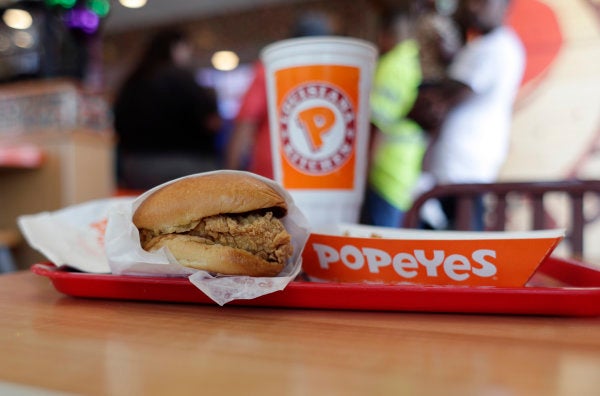 POPEYES, The Pentagon — The darkness that descended on this world when Popeyes Louisiana Kitchen announced they were sold out of their new, beloved chicken sandwich is comparable to biblical times.

It was nothing short of a miracle when Popeyes announced that the sandwich would be back on Nov. 3 — a Sunday no less, when their chicken competitor Chik-fil-A is closed. An absolutely brutal play on their part.

So on Monday, I shouldn't have been surprised as I stood at Starbucks and looked to my right to find a crowd — nay, a horde of Pentagon employees, standing at the Popeyes at the end of the food court.

“Fools!” I chuckled to myself, paying over $5 for coffee. “So desperate for an average chicken sandwich that they'd get in line this early. Couldn't they wait until lunch?”

But reader, they couldn't — a fact that they knew to be true, and that I so obtusely overlooked. At some point the Pentagon's Popeyes ran dry of the coveted chicken sandwich, and though they restocked in the afternoon, by the time I was there an hour later they had already sold out once again.

I will never forgive the man I saw ahead of me leave with four sandwiches.

I should not have been surprised, as my colleague Jeff Schogol chronicled the first wave of Popeyes Mayhem at the Pentagon in August, when within days sandwiches were harder to find than morale. This crushing defeat was mine and mine alone to own.

So today when another Pentagon reporter remarked that he had just secured the sandwich apparently so good that a man in Maryland was fatally stabbed while fighting over one, I grabbed a friend as equally dedicated to the cause and we rushed downstairs like Black Friday shoppers trying to get to the last plasma screen TV, praying that we were not about to be turned away for the second time.

There were several people milling about; I wasn't sure if this meant they were waiting for their own meals, or that they were in the beginning stages of a coup. The area seemed relatively calm, but I didn't trust it. For all I knew, a storm was brewing.

As we walked to the cash register, another customer was handed a sack full of what had to have been at least 15 sandwiches. I wanted to ask what senior leader's office that bag was heading for, but time was of the essence.

I reached the register and hesitantly asked, “Do you still have the sandwich?”

“Yes,” the woman replied wearily, seemingly unaware of the significance of the word she'd just spoken. I couldn't help but wonder what shit she'd seen since the entire country lost their ever-loving minds in the name of fast-food chicken.

And so within minutes, my colleague and I returned to the safety of the press bullpen with a spicy chicken sandwich and fries (lest we forget the superiority of Popeyes' fries, some of the best in the business).

Reader, I don't often admit that people online were right. Mostly because they aren't, if we're being honest. But here I am admitting it — you were all right. This sandwich is extremely good. This sandwich was worth the hullabaloo.

I want to make one thing very, very clear: it does not compare to the Whataburger Honey BBQ Chicken Strip Sandwich, which holds flavor not of this world. But the Popeyes sandwich is very good.

As my friend Jack Detsch from Al-Monitor put it: “I don't know what I enjoyed more, the crispy chicken or the buttery bun.”

Who's to say? Every aspect of this sandwich was incredible. Let's not box ourselves in by choosing just one favorite part. It's nothing like the Chik-fil-A sandwich, which — and I hesitate to say this because Chik-fil-A is one of the great loves of my life — I've found to be…a little flat. But this sandwich stands tall, and the crunch made my heart skip a beat.

It may also make my heart skip a beat or 10 later as my arteries begin slamming shut, but these are risks I'm willing to take.

On one level it pains me to write this because you, dear readers who are stationed outside the U.S., do not yet have this sandwich within your reach. And for that, I weep. But it brings me joy to know that this sandwich, with its generously-sized, perfectly-breaded chicken breast; thick, firm pickles; and soft, elegant bun eagerly awaits your return.

As for me, I may or may not go back again later this week. But that's none of your business.