UNSUNG HEROES: The Air Commando Who Called In Crucial Air Support After Taking A Grenade Blast 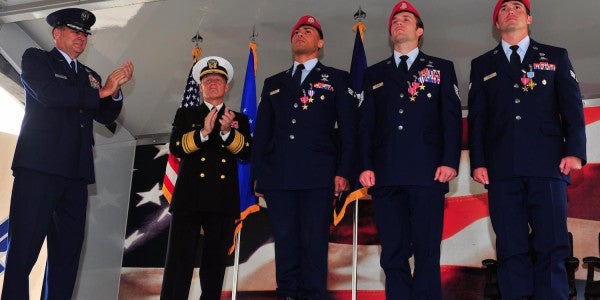 On Sept. 21, 2014, Tech. Sgt. Matthew J. Greiner was engaged in an operation in Helmand, Afghanistan, when his team was ambushed by insurgents. Sustaining serious head injuries from a grenade, Greiner continued to provide air support, protecting his team for nearly 40 minutes and neutralizing the enemy threat.

Greiner, an 11-year veteran from North Hills, Pennsylvania, would earn a Bronze Star Medal with Valor device for his actions that day, and just a week later would earn a Silver Star in a second battle, reported the Pittsburgh Post-Gazette.

Greiner took shrapnel to his thigh, knee, and hands when the 40-mm grenade exploded just five feet from where he stood; he also sustained a concussion. The team’s medic was immediately on him, pulling him to safety to treat his serious wounds and calling in a priority medevac.

The ground force commander tried to call in air support to provide much-needed ordnance against the enemy insurgents, however, was surprised to hear Greiner’s voice over the radio. As he turned to confirm it was Greiner speaking, the commander saw him laying on the stretcher receiving medical attention.

Greiner was eventually taken to Bagram Airfield for treatment, yet insisted to doctors that he be medically cleared and allowed to return to the team.

Around noon on Sept. 27, only a few hours before the team went on an operation that Greiner had planned, he returned to camp, pulled together his gear that was still scattered from the week before and was off before the day was out.

The mission was to disrupt Taliban operations in an area known to be an insurgent stronghold. When they arrived, the fighting was significantly more fierce than they had anticipated.

Over 100 insurgents were prepared for the fight when the team arrived, reported Air Force Times. Greiner was able to use an overhead Predator drone’s sensors to detect insurgents moving in groups throughout the village; he then directed air support to eliminate the targets. He proceeded to direct airborne assets to destroy a massive weapons cache and radio networks while moving under enemy fire to locate and distinguish friendly and enemy positions.

Greiner coordinated with a pair of F-16s to drop four 500-pound bombs to neutralize enemy machine gun positions. Hearing insurgents over the radio call to capture the Americans in his unit, he successfully called in three danger-close strikes with Hellfire missiles, multiple strafing runs from an AH-64 Apache, and directed an AC-130 gunship to destroy insurgents rapidly closing in on vehicles.

When the battle had ended, Greiner had eliminated 21 insurgents and had directed a total of nine dangerously close strikes.

Senior Airman Dustin Temple earned the Air Force Cross, and Senior Airman Goodie Goodman the Silver Star, in addition to Greiner’s Silver Star during that battle. The three airmen are all from the 21st Special Tactics Squadron, which has earned four of the seven Air Force crosses awarded during the Global War on Terror.

A total of 80 airstrikes were directed between the three of them, neutralizing a confirmed 38 insurgents, 28 vehicles, 17 buildings, and 32 fighting positions.