Fifty years ago on Tuesday, communist forces launched the assaults across South Vietnam known as the Tet Offensive. The offensive... 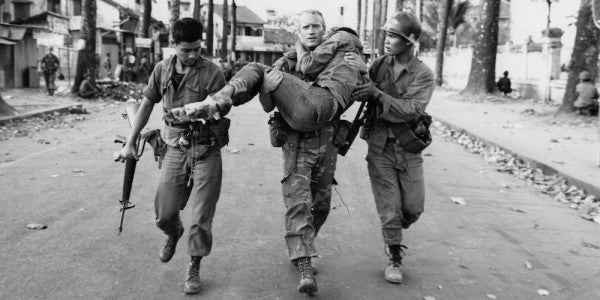 Fifty years ago on Tuesday, communist forces launched the assaults across South Vietnam known as the Tet Offensive. The offensive marked an inflection point in the Vietnam War. President Lyndon Johnson denied a request the following month from his military commander in Vietnam, William Westmoreland, for 206,000 more U.S. troops on top of the more than half a million that already were there after years of escalation. Johnson turned to diplomacy in a search for a peace settlement and announced he would not run for re-election. The following year he turned over power to his successor, Richard Nixon, who presided over four more years of war and a gradual de-escalation until a peace agreement was signed in January 1973.

Multiple American generations have come of age since the Tet Offensive. Those generations can get only a partial, history-book sense of the extraordinary public and political mood within the United States back then, in which the Vietnam War played a huge part. Some things that shaped that mood do not have counterparts today. One of the biggest was conscription, which brought the costs of war more directly and painfully into far more American households than does any warfare today and made the times especially intense on college campuses, with their populations of draft-age males. Another was the Cold War, which provided the framework for seeing the expedition in Vietnam as a necessary counter to an advance of world communism. There also was an interplay between the war and comparably contentious domestic issues of the day, and between a counterculture and an establishment, that made 1968 an especially turbulent year in several respects.

Some observations about the Tet Offensive, however, have applicability to issues of today, especially those involving overseas military expeditions.

By most strictly military measures, the offensive was a defeat for the communists and a victory for the United States and its allies. Communist forces were unable to hold the cities that they had brazenly attacked, and those forces sustained huge casualties. But the military outcome was not what mattered most, either in the immediate aftermath of the offensive or ultimately. The political, perceptual, and emotional outcomes were what mattered, and they led the history books to view Tet not as a U.S. victory but as a big setback.

The enormous and very costly effort that the Vietnamese communists mounted demonstrated that they had the decisive advantage in motivation. They were fighting on, and for, their home turf. They had the strong wind of nationalism at their backs. The Americans were the interlopers and had none of these advantages. The motivation displayed by the makers of the Tet Offensive was more than what they would have shown if they had been mere pawns of Moscow or Beijing in some wider ideological contest.

American attitudes toward the war, before and after Tet, showed how long a dominant frame of mind driving policy can persist in the face of contrary circumstances, and how it takes a big shock to jolt those attitudes into a different framework. The Tet offensive supplied such a shock. It splashed the war onto American television screens in a way that was harder to ignore than anything that had come before. It was the stimulus for Walter Cronkite to editorialize about how the war was a stalemate rather than a winning U.S. effort, and for Johnson to lament that if he had lost Cronkite then he had lost the American people.

Today, U.S. forces are deployed in many countries in efforts in which success and failure tend to get measured in the military terms of the number of militants killed or the amount of territory captured. Again, in most of these places the outcomes that matter will depend less on such metrics and more on politics, perception, and emotion. Again, Americans have the disadvantage of being the outsiders and the hazard of becoming targets of those with nationalist sensibilities or anger wrought by collateral damage. And again, attitudinal frameworks that may be obsolete or inappropriate can show remarkable persistence, whether such a framework involves drawing a line in a southeast Asian jungle against the advance of communism or prosecuting a “war on terror”.

Big shocks still have the potential to jolt Americans onto a different track. Some shocks have been big enough for course corrections. A decade after the U.S. left Vietnam, the bombing of the marine barracks in Beirut helped move the Reagan administration to end its military intervention in Lebanon. But with no single current military intervention having the size of the 1968-era force in Vietnam, and without a draft, a shock comparable to Tet is hard to imagine. Any shock big enough and bad enough to have comparable effects would probably be something we shouldn’t hope for.