Justin Bieber is a babyfaced global superstar renowned for his silky-smooth dance moves and golden pipes. But recent months have... 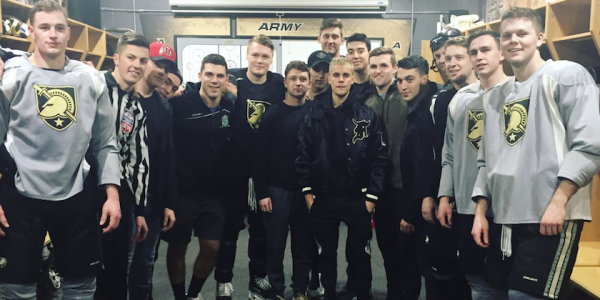 Justin Bieber is a babyfaced global superstar renowned for his silky-smooth dance moves and golden pipes. But recent months have shown us another side of the 23-year-old pop singer — the Bieber who, like many of his fellow Canadians, plays hockey. This is Hockey Biebs.

On March 25, Hockey Biebs, who debuted in January as the recipient of a brutal body check during the NHL’s all-star celebrity match, made his latest appearance on the ice. The venue: The U.S. Military Academy at West Point.

How did Hockey Biebs end up playing hockey at the country’s most prestigious academy for future Army officers? Well, the West Point hockey team — the Black Knights — had just concluded their season with a loss to the Air Force in the semifinals and needed a little cheering up. So they invited Hockey Biebs out for a friendly scrimmage, TMZ reports.

Hockey Biebs borrowed West Point’s Nick DeCenzon’s jersey for the match. It’s unclear what the final score was or whether one of the Black Knights leveled Hockey Biebs the way NHL legend Chris Pronger did during the all-star celebrity game. But video of the match shows Hockey Biebs chasing around the puck and skating pretty gracefully.

Hockey Biebs’ USMA visit concluded with a group photo capturing the pop star and members of the team standing around — and not on — the Black Knight’s logo. This shows Bieber may be learning. In 2013, the artist soon to be known as Hockey Biebs photographed himself standing on the Chicago Blackhawks’ logo in the team’s dressing room — a sign of disrespect to some fans. He caught a lot of flak for that.

The West Point team posted the photo on Twitter with this caption: “Bieber knows the rules… respect the logo.” DeCenzo also tweeted about the match, writing, “Skated with Justin Bieber today…he wore my #6 jersey, assisted my goal, I assisted him, and he fed me water.” Did we just witness the premiere of Mother Teresa Biebs? Maybe so.