"He wants to be a drill sergeant just like his daddy." 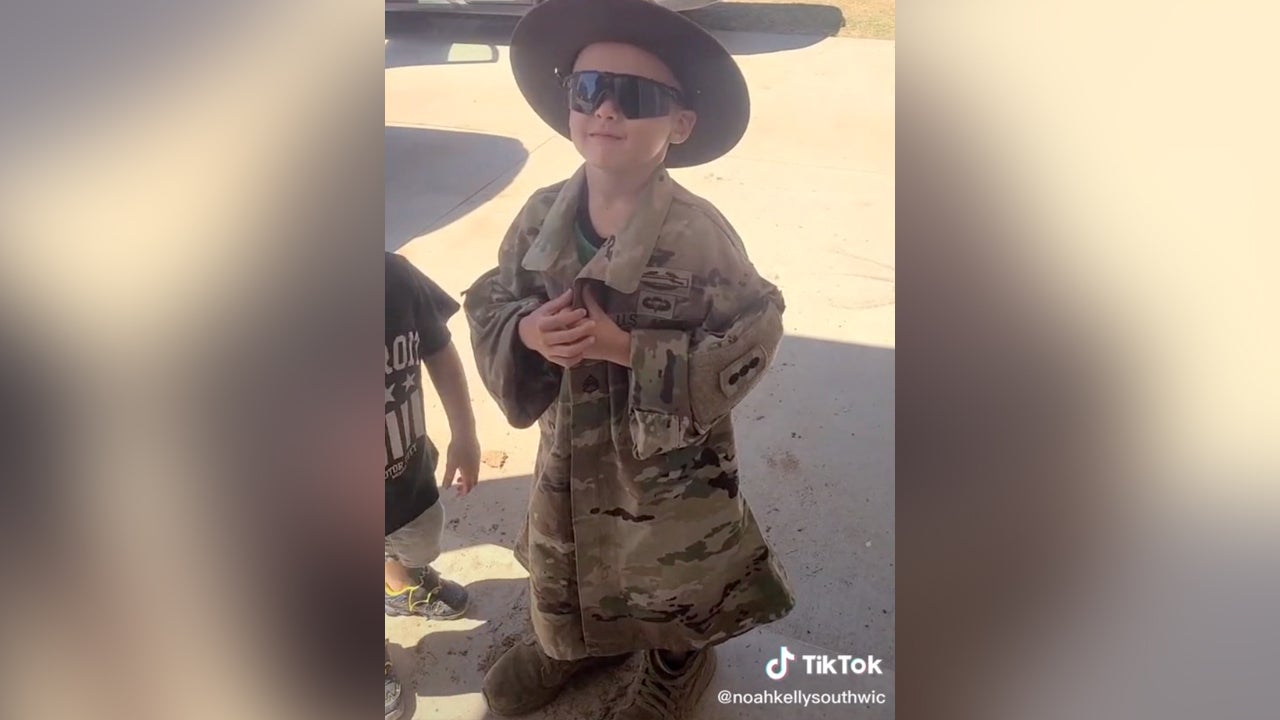 Syris Southwick may be the cutest drill sergeant you’ve ever seen, but he means business.

The 5-year-old mini drill sergeant was featured in a series of adorable TikTok videos posted by his mom, Kelly, this week. Her husband, an actual Army drill sergeant at Fort Sill, Oklahoma, brought their oldest son along with him one day this week to put some trainees to work. “Smoked” is a term sometimes used by exhausted soldiers after their drill sergeants subject them to “corrective action” in which instructors use physical training to reinforce a lesson, like: Don’t leave your rifle unattended, or take off your cover indoors.

“What are we about to go do?” Kelly asks Syris in the first of three videos, posted on Monday.

“Go and get trainees!” Syris responds excitedly, dwarfed in his dad’s uniform.

Kelly told Task & Purpose on Wednesday that she and her husband have “always joked” about bringing Syris around during training after seeing another drill sergeant do something similar. It helps that Syris sees a future for himself in the Army, no doubt wanting to follow in his dad’s footsteps.

“He wants to be a drill sergeant just like his daddy,” Kelly said.

The next video Kelly posted shows Syris seemingly in his element, standing in front of two trainees and ordering them to do push-ups. A crowd appears to be gathering just out of frame as Syris’ dad tells him to ask “Why are you all watching?” and so he does.

“Why are you all watching?” Syris repeats, appearing exasperated, as any drill sergeant would surely be in that situation.

“Say, ‘You want to join in?'” his dad tells him. Syris repeats him, pointing with a perfect knife hand, and soon a few dozen other trainees get down on the ground, laughing to each other as they get ready for push-ups.

Syris counts them through more push-ups as the group can’t help but laugh hearing his little voice yell, “down!” Soon, his dad points out someone in the crowd who has a hat on and urges Syris to call him out for it.

“Why do you have a hat on?” Syris yells as other trainees start laughing.

“We’re starting over,” he says at the prompting of his dad, bringing on more groans and laughter, before pointing back to the soldier and explaining: “Because he had a hat on!”

While the videos were intended to be harmless and all of the trainees were “really good sports about it,” Kelly said not everyone found them as enjoyable. She said her husband has since received counseling over the videos. Col. Daniel Blackmon, commander of the 434th Field Artillery Brigade, said on Thursday that while no one was mad about the video — which he described as “super cute and funny” — the soldier was counseled about the brigade’s social media policy, which prevents trainees from being filmed without permission from higher-ups.

“I just want all of my folks to be very aware of the risks and possible backlash,” Blackmon said. “It’s about protecting him, his family, the trainees, and the brigade as a whole. No one was mad about it, just concerned because we’ve seen how good intentions can sometimes be misconstrued and what was in good fun could be turned into something nefarious which this clearly was not.”

Kelly said she has gotten negative comments from people who didn’t appreciate the trainees being filmed, which she said she understands, but that no one was forced to participate.

“They were fantastic,” Kelly said of the trainees who humored her drill-sergeant-in-training. “I’m really glad they all participated and had a smile on their face.”

It’s safe to say though that no one had as good a time as Syris, who Kelly said came running back to the car afterwards where she was waiting with their other kids.

Update: This post has been updated after publication to include comment from the 434th Field Artillery Brigade commander regarding the unit’s social media policy as it pertains to ‘super cute and funny’ videos like the ones in the story.