President Donald Trump isn't the first person to suggest using nuclear weapon for reasons beyond warfare, and he won't be the last 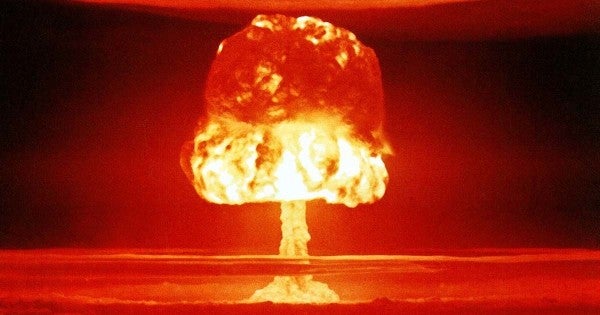 President Donald Trump isn't the first person to suggest using nuclear weapon for reasons beyond warfare, and he won't be the last.

On Sunday, Axios reported that Trump had suggested “suggested multiple times” to national security officials that they “explore using nuclear bombs to stop hurricanes from hitting the United States.”

Trump promptly rebutted the report on Monday as “fake news” (Axios is sticking by the story), all but ensuring that every bored journalist in Washington, D.C. will spend the news abyss that is the last week of August making bad hurricane nuke jokes on Twitter.

Which is fine! As plenty of people (Axios included) have pointed out, the hit-a-hurricane-with-a-nuke concept dates back to the Eisenhower era and has been thoroughly examined, and debunked, as an effective means of weather manipulation by the National Oceanic and Atmospheric Administration. National Geographic even explored the idea three weeks after Trump's electoral victory in November 2016.

But Trump isn't channelling some antiquated logic from early years of the Atomic Age, but a reflection of how the general public thinks about nuclear weapons. Call it the Nelson Muntz Doctrine of American nuclear power: Gotta nuke something!

As the only country to ever use nuclear weapons against another population (and would gladly again, according to recent polling), the United States holds a unique perspective: namely, they're a means to a strategic end. Indeed, Army reservist Luke O'Brien recently pointed out at the Modern War Institute, that the Pentagon's 2018 Nuclear Posture Review “embraces what amounts to defense orthodoxy by arguing that nuclear weapons ' the historically unprecedented absence of major land invasions between great powers since 1945.'”

As O'Brien writes, this logic is flawed — plenty of nations have gone to war despite the threat of nuclear annihilation since 1945 —but the myth of nuclear technology as a silver bullet persists. And this principle isn't just “defense orthodoxy,” but a part of American culture. Nukes, the fiery source of the post-World War II Pax Americana, get the job done. If the principle applies in war, why not in peace, right?

Consider, for example, the gaggle of “armchair experts,” as the New York Times put it, who in 2010 floated the idea of using an underwater nuke to seal the oil well that was spilling gallons of oil into the Gulf of Mexico. The idea was based on the Soviet Union's use of a nuke to extinguish a three-year-old fire at a natural gas field in the early 1970s as part of a program to explore “peaceful” nuclear explosions — and rained radiation down on thousands of unsuspecting Russians for years.

But unlike Trump's hurricane nuke query, those armchair experts weren't in the Oval Office. “Drill a hole, drop a nuke in and seal up the well,” as CNN reporter (and now chief Fox News White House correspondent) John Roberts put it at the time. The New York Times even considered the idea that “seafloor nuclear detonation is starting to sound surprisingly feasible and appropriate.”

According to O'Brien, nuclear weapons exist on “a graduated scale that extends all the way down to the tactical level,” and a low-yield nuclear devices certainly have a place in battlefield calculus. But both the hurricane and Gulf oil spill nuke meditations capture a casual treatment of nuclear tech that preceded Trump and, frankly, will live on far beyond him.

Anyway, all of the media coverage of Trump's hurricane nuke request will seem like an absurd nothingburger, but now feels like as good a time as any to remind us that, to borrow a line from O'Brien (and Task & Purpose contributor Kelsey Atherton): nukes aren't fucking magic, people.

And now, cue the music: