On Wednesday President Donald Trump signed an executive order that will make it easier for permanently disabled veterans to receive forgiveness for their student loan debt. 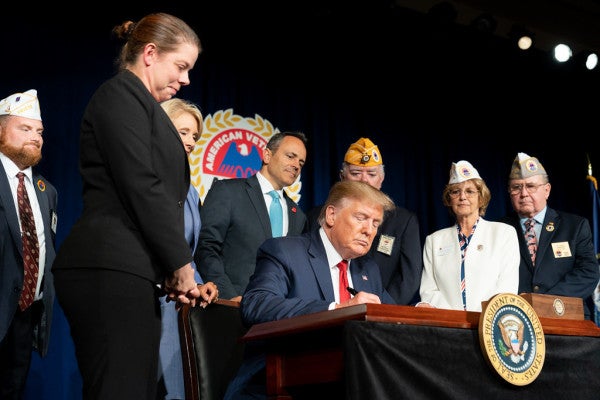 President Donald Trump signed an executive order on Wednesday that will make it easier for permanently disabled veterans to have their student loan debt forgiven.

“I am proud to announce that I am taking executive action to ensure that our wounded warriors are not saddled with mountains of student debt,” Trump said at the American Veterans National Convention in Louisville, Kentucky on Wednesday, where he signed the Presidential Memorandum on Discharging the Federal Student Loan Debt of Totally and Permanently Disabled Veterans.

“Altogether, this action will wipe out an average of $30,000 in debt owed by more than 25,000 eligible veterans who have made immense sacrifices — the ultimate sacrifice, in many — in many ways, for our nation,” Trump continued.

Though student loan forgiveness for certain veterans isn't new, fewer than half of the 50,000 eligible veterans — meaning those with 100% combat or service-connected disabilities — have actually received the student loan discharge they're entitled to, due in large part to an overly complicated application process.

“For the last decade, veterans seeking loan discharges have been required to submit an application to the Secretary of Education with proof of their disabilities obtained from the Department of Veterans Affairs,” reads the Presidential Memorandum.

“The process has been overly complicated and difficult, and prevented too many of our veterans from receiving the relief for which they are eligible. This has inflicted significant hardship and serious harm on these veterans and has frustrated the intent of the Congress that their Federal student loan debt be discharged.”

The executive order is designed to fix that by streamlining the process, and shifting the responsibility from eligible veterans, to the Departments of Veterans Affairs and Education.

The executive order directs the Department of Education and the VA to implement the changes as “expeditiously as possible.”

Additionally, Trump announced that “there will be no federal income tax on the forgiven debts,” and encouraged “all 50 states to immediately waive all applicable state taxes as well.”

“We're excited about this,” Joe Chenelly, the national executive director for AMVETS told Task & Purpose. “We're always trying to help out veterans in holistic ways. We look at all the factors that play into a veteran living well, not just living 'un-sick.' Debt and education are two big factors in the veteran living well. In the talk about combating veteran suicide and being a productive member of society, student debt can certainly play a momentous role.”

“This executive action is a critical step in the right direction to ensure that veterans who have sacrificed so much in service to this country have the tools to transition back to civilian life with meaningful education and career opportunities — without carrying a crushing, insurmountable financial burden,” Jeremy Butler , the CEO of Iraq and Afghanistan Veterans of America said in a statement provided to Task & Purpose.