UNSUNG HEROES: The Green Beret Who Fought Hard On A Narrow Mountain Road In Afghanistan

On a single lane road in the mountains of eastern Afghanistan in 2010, Chief Warrant Officer Jason Myers’ patrol was... 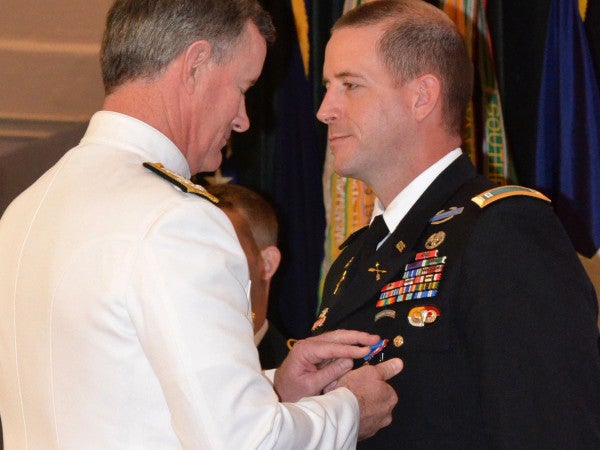 On a single lane road in the mountains of eastern Afghanistan in 2010, Chief Warrant Officer Jason Myers’ patrol was ambushed by nearly 100 Taliban fighters.

The attack came during a special forces operation in Khost province, Afghanistan, with Afghan troops. Machine gun and rocket-propelled grenade fire rained down on the men, trapped on a road no wider than a Humvee.

“It just opened up,” the soft-spoken Myers later said of the attack. “There were at least seven RPGs impacting around us.”

They attempted to move out of the kill zone, but an Afghan vehicle was disabled and blocking the road ahead. Myers departed the safety of his vehicle and ran toward the Afghan truck, and evacuated two wounded Afghan policemen from the vicinity, according to a report from the Army Times.

He then took control of the vehicle’s steering wheel so it could be pushed from the road. But the evacuation was soon halted again when two Afghan troops departed their vehicle to seek cover in a small riverbed. Myers joined them and fired on the enemy position with tracer rounds, exposing his position, but allowing his machine gunners to focus their fire on the enemy.

He rallied the Afghans to get back in their vehicle and proceeded to press ahead — on foot. He treated wounded comrades and dealt with malfunctioning weapons.

Then, with close-air support just three minutes away, he sought cover until help arrived.

For his actions that day, Myers received the Distinguished Service Cross, an award for valor second only to the Medal of Honor.

“It's really humbling that they're holding me up as an example, but it wasn't my actions,” he reportedly said. “I helped, but everybody who was there that day, they all played a critical role.”