Best Of 2016: The Stories From Task & Purpose You’ll Want To Read Again

2016 was a big year for our team and our readers. We started a podcast about Bowe Bergdahl, brought on... 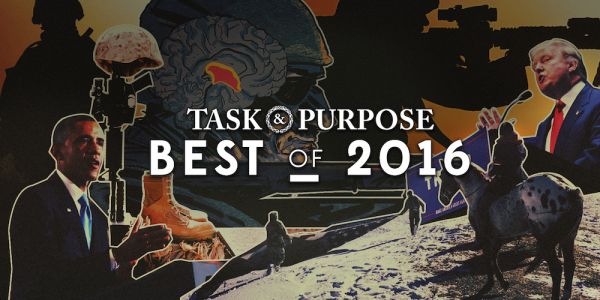 2016 was a big year for our team and our readers. We started a podcast about Bowe Bergdahl, brought on some incredible writing talent, and covered stories that no one else was talking about from the military and veterans’ perspective. From Standing Rock to the election, here’s our list of Task & Purpose’s best stories from 2016.

We profiled a family who’s experiencing firsthand the impact of post-traumatic stress disorder and its lasting effects on life at home.

COMIC: The Navy SEAL Who Was Shot 27 Times And Kept Fighting

From the left-leaning idealist who dreams of writing the next great war novel to the patriotic computer nerd, we created an illustrated guide to the modern infantry platoon.

Sebastian Junger spoke to us about the allure of combat, the civilian-military divide, and why over valorizing veterans only does more harm than good.

This Is Your Brain On War

We teamed up with former West Point psychology professor and author Lt. Col. Dave Grossman to produce this visual guide to what happens to the mind and body before, during, and after combat.

President Obama published an exclusive op-ed on Task & Purpose about America’s sacred covenant with veterans. The president reflected on the modern generation of veterans, the work he’s done on veterans affairs over the past eight years, and the work that lies ahead.

Maj. Lisa Jaster explains how she physically and mentally prepared for the Army’s elite Ranger School, and what it meant to be one of the first women to ever earn the Tab.

6 Types Of Vets Dominating Your Social Media This Election

Every election season, America’s veterans get on the internet to fight over how the country they swore to defend from enemies foreign and domestic should be run. We illustrated this year’s top six contenders.

Here’s Where Clinton And Trump Stand On Veterans Issues

We developed a comprehensive package of Hillary Clinton and Donald Trump's plans during the campaign for veterans, service members, and their families if elected president.

On the 15th anniversary of Operation Enduring Freedom, we released an original eight-minute video detailing the war in Afghanistan President George W. Bush launched in 2001.

Why ‘The Walking Dead’ Is Full Of Useless Idiots, According To A USMC Sgt Maj

The characters of AMC’s popular post-apocalyptic drama struggle against all sorts of obstacles, from zombies to food security, to other groups of survivors. A Marine explained why they fail time after time after time.

Mark Wahlberg Thinks Celebrities Need to Shut Up About Politics

The star of the new terrorism drama “Patriots Day” spoke to us about how out of touch Hollywood is with the average American.

The Tragic And Ignored History Of Black Veterans

Between the end of the Civil War and World War II, many black veterans who fought for their country abroad became victims of violent racism at home. We took a look at lynchings of black veterans in America between 1877 and 1950.

Why They Went: The Inside Story Of The Standing Rock Veterans

In early December, staff writer Adam Linehan spent five days on the ground with an estimated 4,000 veterans descended on the Standing Rock Sioux Reservation in North Dakota and helped put an end to a once seemingly hopeless struggle.