The top leader of the Department of Veterans Affairs wrote in a Wednesday op-ed that reported delays in mail-order prescription deliveries due to changes at the U.S. Postal Service amounted to little more than "conspiracy theories,” despite his agency confirming those deliveries have recently been delayed on average by roughly 25 percent 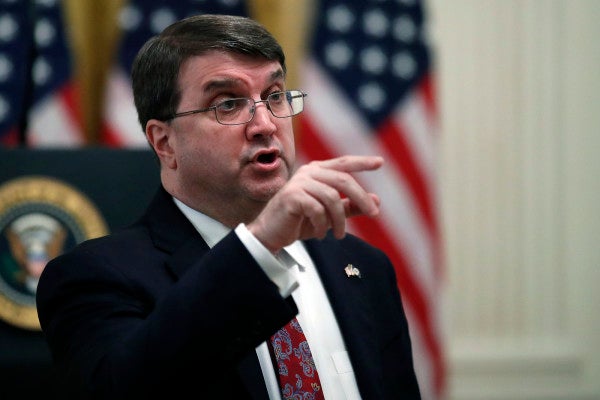 The top leader of the Department of Veterans Affairs wrote in a Wednesday op-ed that reported delays in mail-order prescription deliveries due to changes at the U.S. Postal Service amounted to little more than “conspiracy theories,” despite his agency confirming those deliveries have recently been delayed on average by roughly 25 percent.

Robert Wilkie, the secretary of veterans affairs, claimed in the op-ed published by The Washington Examiner that media reports of prescription delays were using veterans “to score political points against the Trump administration — this time by alleging delays in the delivery of prescription drugs by the U.S. Postal Service.”

Wilkie added that these stories “falsely imply that the Department of Veterans Affairs is no longer a reliable supplier of prescription drugs through the mail.”

However, Wilkie's claims are at odds with statements made by the VA.

Many learned about the issue in mid-August, after the nonprofit group Disabled American Veterans, which represents roughly 1 million wounded veterans, released a statement condemning the delays as “unacceptable” to injured veterans who depend on the mail delivery of prescriptions, claims decisions, and other critical messages from the VA.

“The VA has now confirmed to us that the United States Postal Service, which is responsible for delivering about 90% of all VA mail-order prescriptions, has indeed been delayed in delivering these critical medications by an average of almost 25 [percent] over the past year, with many locations experiencing much more significant delays,” said Stephen Whitehead, DAV national commander.

In response, a VA official told Task & Purpose on Wednesday that DAV “does not speak for VA, and in this instance, the statements attributed to DAV omitted crucial context that the average number of days to deliver VA prescriptions via USPS averaged 2.86 days in July of 2020, faster than the 3-to-5 day delivery standard VA strives for,” said Christina Noel, an agency spokeswoman.

Noel acknowledged the department has seen delays in deliveries, but argued they were relatively minor.

Todd Hunter, a DAV spokesman, told Task & Purpose that “we stand by our original statement as it was formulated based on VA-provided information.”

Related: How the battle over the US Postal Service is costing veterans dearly

Though the VA says it has successfully met its benchmark of delivering medication to veterans within three to five business days on average, for those whose meds have been delayed, it can be a significant problem.

“There’s a warning label on one of my meds that if I stop taking it abruptly there’s a risk of seizures,” Tenley Lozano, a former coast guardsman in San Diego, told Task & Purpose in August.

For 73-year-old Marine veteran Richard Valdez, one of five who spoke with Task & Purpose about the issue, three of his four prescriptions — all critical to his health — were delayed by weeks.

More than 80 percent of veterans who receive care from the VA get their prescriptions in the mail through Consolidated Mail Outpatient Pharmacies, which deliver prescriptions to some 330,000 veterans each day. The VA largely relies on the Postal Service to deliver those prescriptions — with more than 125 million prescriptions delivered in 2019 alone — though it does use commercial carriers like the United Parcel Service to handle some of its deliveries.

The Postal Service has become the latest political battleground in the run-up to the 2020 presidential election after President Trump said in August he would oppose funding for the agency in order to limit mail-in voting.

“Now they need that money in order to make the post office work, so it can take all of these millions and millions of ballots,” Trump said during an Aug. 13 interview on Fox Business Network. “But if they don’t get those two items, that means you can’t have universal mail-in voting, because they’re not equipped to have it.”

Trump’s comments sparked a renewed round of public outrage over perceived attempts to hobble the Postal Service, from planned cost-cutting measures to the removal of mail-sorting machines.

Although critics have focused on how reduced mail capacity could affect voting rights, lawmakers have become increasingly concerned over the potential impact on critical veterans’ benefits.

“Recent operational changes you ordered at USPS are needlessly delaying veterans’ access to life-saving prescriptions when the health and lives of Americans are already at high risk due to the COVID-19 pandemic,” a group of 31 senators wrote in an Aug. 13 letter to Postmaster General Louis DeJoy.

Another letter signed by four congressmen was sent to DeJoy the following day.

“With local VA healthcare systems around the country experiencing medication shortages and switching to 30-day refills, which could cause additional delays and disruptions given the reliance on USPS, these delays are a real threat to our veterans, and your agencies must do everything possible to rectify the situation,” lawmakers wrote in an Aug. 14 letter to both DeJoy and Wilkie.