"If you are good to the mules, the mules will be good to you." 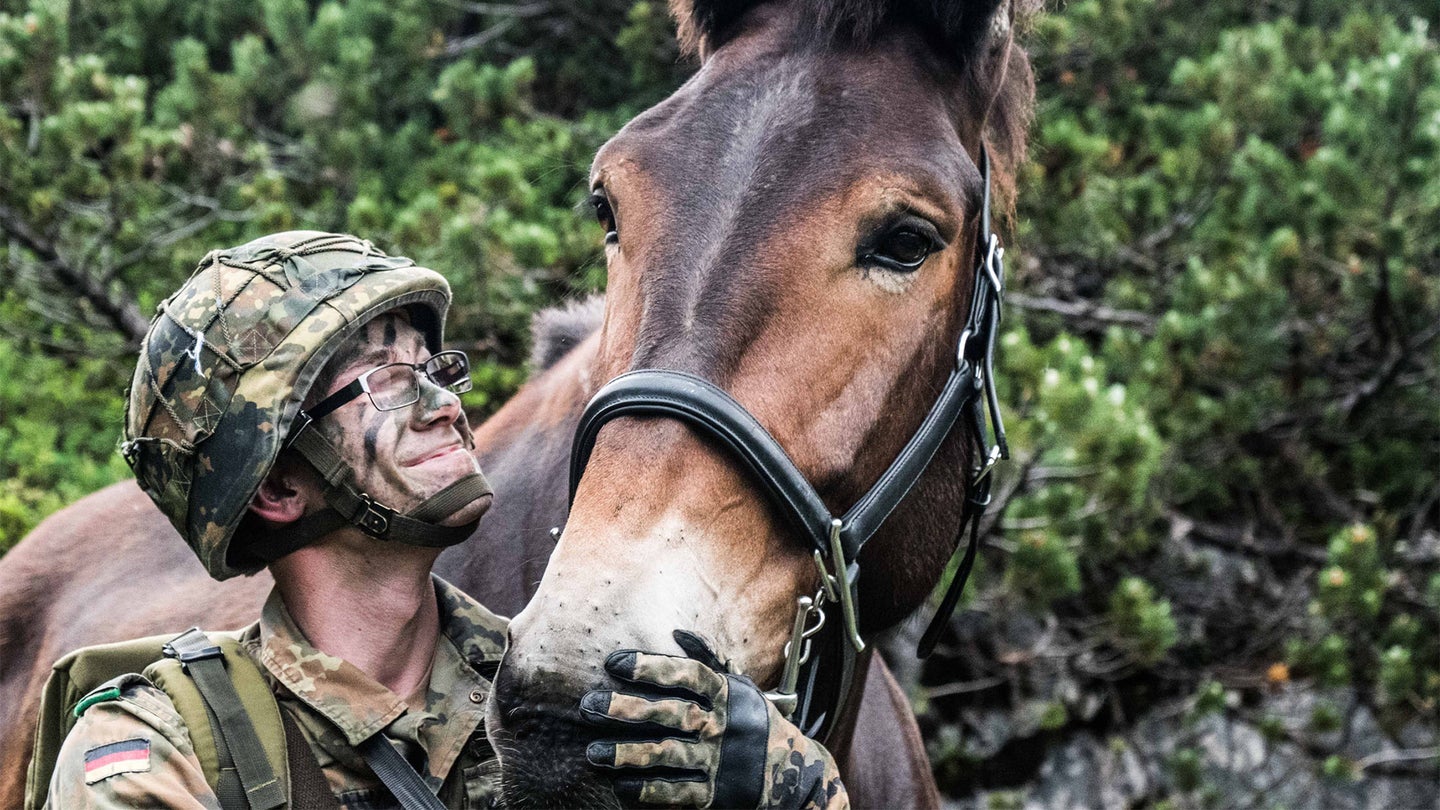 Marching through the Alps all day with a full combat load takes a lot out of you, especially on hot summer patrols at high altitudes. Luckily, Sgt. Mario Thiess, of the German army’s Mountain Infantry Brigade, has a four-legged buddy to share the load with: the humble mule.

“If we have a long march and it’s very high and hard for me, then I talk to him and say ‘hey, ok only a few hundred meters to go, we can do it,’” Thiess said in a 2019 NATO video. “And also if I have some problems, I will talk with the mule.”

That’s right, Thiess has a special bond with his mule, and it’s hard not to blame him: he and his fellow soldiers hike all day up and down some of the steepest terrain in Europe with their mules. Though pack animals and armies once marched everywhere together, they are rarely found on the modern battlefield. In fact, Thiess and the rest of his brigade are the last unit in the German army to train with mules, which they use to carry food, water, ammo, weapons, and other supplies up to troops isolated in steep mountain terrain. Unlike jeeps, motorcycles, or helicopters, mules and horses can reach all terrain in any weather and without the same noise levels as a helicopter.

Though the U.S. Army and Marine Corps have experimented with robot mules over the past decade, there’s something special about the bond that human soldiers form with millennia-old mule technology, and that bond was on full display in the video about the German Mountain Infantry Brigade.

“You see it when the mule trusts his human soldier,” Thiess explained. “If they don’t trust together, then the mule will stop. The bond gets so heavy and close together because you’re working each day with the mules, especially if you are on march in the mountains five, six, seven hours a day.”

Like the soldiers themselves, the mules each have distinct personalities. Thiess introduced the camera crew to Batzy, “he’s a cool guy;” Daisy, “our little diva;” Fritz, “who gets really nervous sometimes;” Yogi, “who is 18 years old, he’s our grandpa;” Flicker, “who is also very nice, she is like a teddy bear;” and Freida, who is “the biggest one. She weighs 700 kilos and she also eats a lot of hay.”

The six mules are one of 50 in the brigade, along with 20 riding horses. The brigade has a dedicated veterinarian and 10 blacksmiths who are kept busy making horseshoes for the beasts of burden, Thiess said. But it’s not like the unit’s just for show: in the past they have deployed to Kosovo and Afghanistan.

“Our unit is very important for NATO because whenever there is a mission in the mountains, it’s very important to have supply to the troops,” said 1st Lt. Maximilian Höfler, also of the mountain infantry brigade. “And in our terrain we are, in the end, the best.”

American service members reading this may be wondering: “where can I get one of these mules to carry my pack?” And the answer is that the U.S. military already trains troops in pack animal usage. The Marines have a school for it at their mountain warfare training center in Bridgeport, Calif., and the Army sometimes sends Special Forces troops there or to civilian schools.

More recently, those same Special Forces and Marines used horses and mules to maneuver through the mountainous terrain of Afghanistan. The Army even included a guide to different feed types in a 2004 report on pack animals. The mule is also still the mascot for the U.S. Military Academy at West Point.

“Oats are the safest and most commonly used of all grains for the pack animals,” reads the 2004 Army report. However, “the pack animal should not be deprived of hay or something with similar bulk, such as straw, for any considerable length of time.”

Knowing these lessons is essential for keeping mules happy, which in turn keeps everyone else happy. After all, they are the ones carrying the whole team on their backs.

“The mules are strong, they are helpful, and they are honest,” Thiess said. “And if you are good to the mules, the mules will be good to you.”

Related: Soldiers are finally getting a robot mule that can haul 1,000 pounds of gear