Monday afternoon found Defense Secretary James Mattis diving, dipping, ducking, and dodging as a gaggle of reporters pressed him on... 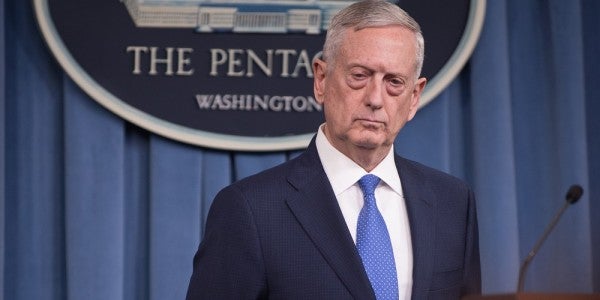 Monday afternoon found Defense Secretary James Mattis diving, dipping, ducking, and dodging as a gaggle of reporters pressed him on whether the focus of the U.S. military mission in Syria has shifted away from ISIS and toward creating a bulwark against Iran.

“We’re not going to leave as long as Iranian troops are outside Iranian borders and that includes Iranian proxies and militias,” Bolton reportedly said Monday at the United Nations General Assembly in New York.

At a Pentagon news conference afterward, Mattis insisted that he and Bolton are in agreement but he reiterated that the U.S. military’s mission in Syria is defeating ISIS. That mission entails training local security forces so they can prevent ISIS from making a comeback, Mattis said, citing the collapse of security in Iraq after U.S. troops left the country in December 2011 as a cautionary example of what happens when we don’t stick around for the long haul.

“Getting rid of the caliphate doesn’t mean you then blindly say, ‘Ok, we got rid of it,’ march out, and then wonder why the caliphate comes back,” Mattis said.

The secretary of defense went on to explain that Washington is supporting the Geneva process – a United Nations effort to negotiate an end to the Syrian civil war – which hinges on Iran agreeing to “stop fomenting the trouble” by providing Syrian dictator Bashar al-Assad with critical military and financial aid.

But when asked whether U.S. troops will remain in Syria until Iran withdraws its troops and proxy forces from the country, Mattis deferred to Bolton.

“I think we’re on the same sheet of music,” Mattis said, adding that he meets with Bolton weekly and had already talked to him twice on Monday.“I’ve told you what we’re doing there right now and there is no daylight between his appreciation of the situation and mine.”

Sensing confusion, Mattis offered that the communication barrier was probably due to the labyrinthine nature of the the situation in Syria, which he called “the most complex” he has encountered in his more than 40 years of public service.

“I understand why you want clarity,” Mattis said. “Please understand: issues can only be clarified to the point that the complexity permits. There’s 100 different little intricacies and nuances, I’ll be the first to admit.”

After being hit from every direction on Syria, Mattis was treated to a round of questions about Afghanistan, courtesy of Task & Purpose. The defense secretary was visibly perturbed when T&P; asked if the surging death toll among Afghan security forces seemed to indicate that the Taliban is winning the war.

While heacknowledged that the Afghan army has taken “severe casualties” over the past 18 months, Mattis said the Afghans are not at risk of being bled white by the Taliban. The Afghan defense minister told parliament on Sunday that 513 Afghan troops had been killed in a single month of fighting and another 718 were wounded.

Mattis said he was unable to confirm those numbers but said “they sound about right.” Even though Afghan continue to suffer high numbers of killed and wounded, he added, “it appears they have sustained it, somehow.”

“They have continued to fight,” Mattis said. “We are adjusting tactics. We’re bringing more support in certain areas. So far, they have taken hard casualties over the last year and they’re still in the fight.”