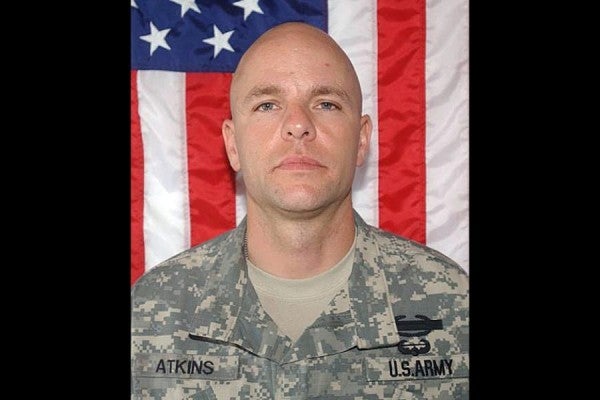 President Donald Trump will posthumously award the Medal of Honor to Army Staff Sgt. Travis Atkins at the end of March for his “conspicuous gallantry” in Iraq during Operation Iraqi Freedom by using his own body to protect others from a suicide bomber, the White House announced on Tuesday.

On June 1, 2007, Atkins and his unit were conducting route clearance, the Army said in a release, when they saw “suspected insurgents crossing an intersection” in Abu Samak. Atkins ordered the driver of his Humvee to pull over so he could “interdict the suspected insurgents.” He went to one of the men to search him for weapons, which the man resisted.

Atkins and the man then engaged “in hand-to-hand combat,” as the insurgent went to detonate a suicide vest under his clothing. Per the Army, Atkins “grabbed the suicide bomber from behind with a bear hug and slammed him onto the ground,” ultimately being killed when the bomb detonated.

He saved the other soldiers in his unit, who were “only feet away,” according to the Army. He was previously awarded the Distinguished Service Cross.

He was serving with D Company, 2d Battalion, 14th Infantry Regiment, 2d Brigade Combat Team, 10th Mountain Division. He enlisted in November 2000, deployed to Iraq in 2003 and then was honorably discharged. He became a student at the University of Montana, and then re-enlisted in 2005 and was again deployed to Iraq in August 2006, according to the White House.

His mother, Elaine Atkins, told the Associated Press that Atkins “loved the Army. … When he joined the Army, that's when he found his niche.” Per the AP, he had “already survived two roadside bombs” during his time in Iraq.

President Trump will be joined by Atkins' parents and son, Trevor Oliver, who Army Times reports will accept the Medal of Honor on behalf of his father.

SEE NEXT: Netflix Just Announced A 'Medal Of Honor' Series That Recreates Some Of The Most Incredible Acts Of Valor From WWII To Post-9/11