The heroic last stand of 2 Marines in Ramadi

Their final stand and sacrifice all took place in a matter of seconds. 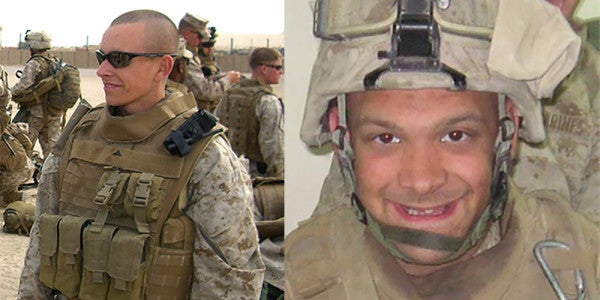 The truck stopped just shy of Cpl. Jonathan Yale and Lance Cpl. Jordan Haerter, its windshield and the driver behind the wheel both blown away in a hail of gunfire. Then it detonated, killing the two Marines and leveling a city a block.

The attack, the Marines’ final stand, and their sacrifice all took place in a matter of seconds.

Haerter and Yale, were posthumously awarded the Navy Cross for their actions, which were later recounted by Iraqi police present that day and captured on a security camera, according to Business Insider.

Before that day, Yale and Haerter had never met. They came from different backgrounds and deployed with different units, with Yale preparing to head home with the rest of 2nd Battalion, 8th Marines, and Haerter just beginning his seven-month tour with 1st Battalion, 9th Marines. But their final act of courage, defiance, and selfless sacrifice bound the two together forever.

According to a 2009 CBS News report, 21-year-old Yale had a rough upbringing in Virginia, and Haerter, who was 19 when he was killed, came from a middle-class family in Long Island, New York. If it wasn’t for the Marines, it’s likely that the two never would have met.

But, they did meet and that same day they made a split-second decision to stand, fight, and ultimately die together.

“I was on post the morning of the attack,” said Lance Cpl. Benjamin Tupaj, a rifleman with 1st Battalion, 9th Marines, in a May 2008 article released by the Department of Defense. “I heard the go off at a cyclic rate and then the detonation along with a flash. It blew me at least three meters from where I was standing onto the ground. Then I heard a Marine start yelling ‘we got hit, we got hit.'”

Shortly after the attack, Gen. John Kelly, the commander of all American and Iraqi forces at the time, met with those present that day, which he later described in a speech at the Semper Fi Society of St. Louis, Missouri, published by Business Insider.