10 years ago, a handful of American soldiers held the line as hundreds of Taliban insurgents attacked a tiny US outpost

It was one of the bloodiest battles of the war and resulted in two Medal of Honor recipients. 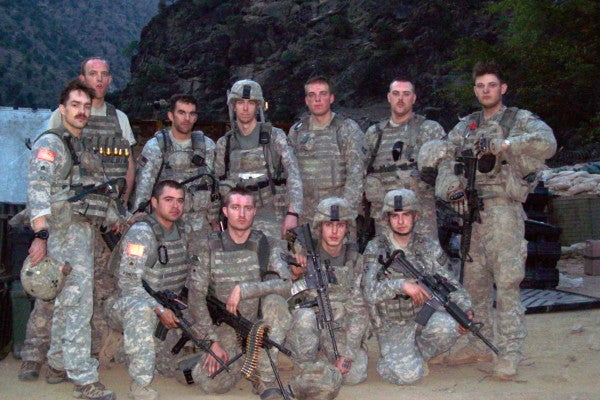 At a remote outpost in Afghanistan on Oct. 3, 2009, a handful of American soldiers held back an assault by as many as 300 Taliban fighters during the Battle of Kamdesh. Though the attack was repelled, and as many as 150 Taliban fighters were killed, it came at a terrible cost: Eight Americans died, and 27 were wounded.

It was one of the bloodiest battles of the war and resulted in two Medal of Honor recipients: Clint Romesha, and Ty Carter.

The battle, which took place at Combat Outpost Keating — a small Army base built below three mountains in Nuristan Province — began as hundreds insurgents attacked from multiple directions and eventually, breached the walls, which was protected by just 60 soldiers from Bravo Troop, 3rd Squadron, 61st Cavalry Regiment, 4th Infantry Division.

In addition to the 12-hour battle yielding two Medals of Honor, more than two dozen Bravo soldiers received the Purple Heart for combat wounds, and many more received valor awards such as the Silver Star, Bronze Star, and Army Commendation Medal.

The heroism and sacrifice that took place at Keating have been chronicled in numerous award citations, articles, multiple books — including one by Romesha — and soon, will appear in two feature-length films.

“I still believe that to this day. I did a job that any other person put in that position would have done,” Romesha told the AP earlier this year.

On Nov. 9, 2018, Netflix launched a new documentary series, Medal of Honor, which includes episodes profiling both Romesha and Carter. The docuseries uses a mix of interviews, combat footage, and cinematic reenactments to tell the stories of eight recipients of the nation's highest award for valor.

Perhaps the greatest insight from the series, and from past interviews with Carter and Romesha, isn't about what they did at COP Keating, but why they chose to share their stories with others.

“All of a sudden being thrust into the limelight was a lot to handle at first, but then I really kind of realized that we as veterans are kind of doing ourselves a disservice by not sharing our experiences,” Romesha explained near the end of his episode of Medal of Honor.

After Taliban fighters had made it into the perimeter of the outpost, Romesha, though wounded, led a counteroffensive to push them back.

“It weighs heavy, but to sit here and talk about it — to sit here and share it with others, I get to dump a bit of that weight on you, and you get to help me carry it now because you know the sacrifice now,” Romesha continued. “You know their names, and maybe have a little more of an understanding of what service to country means.”

Then-Spc. Ty Carter and Spc. Jonathan Adams, the Blue Platoon forward observer, look at the village of Kamdesh, Afghanistan, while on their first patrol out of Observation Point Fritsche, May 2009.US Army

Carter expressed a similar sentiment when I interviewed him in 2016.

“By speaking and telling the story, it's a therapy for me,” Carter told Task & Purpose. “It helps me through my stress and it also chips away from the survivor's guilt I have. At that position, out of the eight, five were either killed or mortally wounded, so when you watch that and you know what happened all around you, you know what these guys did to help save you, you feel like you have to tell people what these guys did. It's never a 'have to,' it's always a choice.”

During the battle, Carter repeatedly exposed himself to enemy fire as he attempted to rescue a fellow soldier, Spc. Stephan L. Mace, who tragically succumbed to his wounds.

“I don't like doing it,” he continued. “It hurts every time I speak about it, but I think it's necessary. It helps me out.”

Editor's note: A version of this article was originally published on November 9, 2018.