The Battle of Kamdesh on Oct. 3, 2009, gave America a story of heroism and brotherhood, but at a terrible... 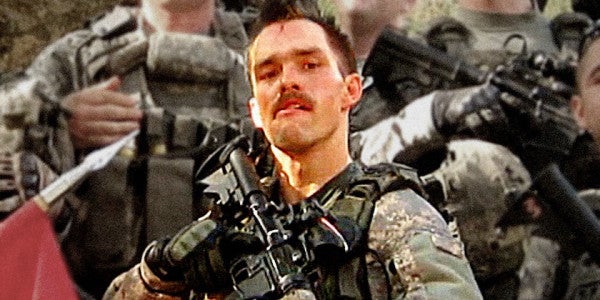 The Battle of Kamdesh on Oct. 3, 2009, gave America a story of heroism and brotherhood, but at a terrible cost: Eight Americans were killed, and 27 were wounded. Now the fight that pitted a handful of soldiers at Combat Outpost Keating in eastern Afghanistan against several hundred enemy insurgents, is receiving the silver screen treatment, according to an exclusive by The Hollywood Reporter.

Titled The Outpost, the upcoming film by Millennium Media is expected to start production in August and is based on CNN anchor Jake Tapper’s best-seller of the same name. The Outpost will star Scott Eastwood (Pacific Rim: Uprising), Caleb Landry Jones (Get Out) and Orlando Bloom — you know, the guy from all the elf and pirate movies, though in his defense he’s not new to war flicks (Black Hawk Down).

Eastwood will take on the role of Medal of Honor recipient, Staff Sgt. Clint Romesha, and Jones will play Spec. Ty Carter, who also received the Medal of Honor for his actions that day. Bloom has been cast as 1st Lt. Benjamin D. Keating, who was killed Nov. 26, 2006 when his vehicle overturned — the camp where the 2009 battle took place was renamed in his memory.

Directed by Rod Lurie (The Contender, Commander In Chief), The Outpost will feature roles for veterans, both on and off set, according to The Hollywood Reporter.

“I am very proud to say that many of the actors we have already cast in the supporting roles are themselves veterans — as are crew members,” Lurie, an Army vet and West Point graduate himself, told the Reporter.

But Lurie’s film isn’t the only drama about CoP Keating in the works, either. Another war movie, this one backed by Sony, is titled Red Platoon and based on Romesha’s book of the same name.

As for The Outpost, filling out the cast with folks who talk the talk, walk the walk, and know which patches go where on a uniform is a bit of an overlooked, though hardly new, trend in big budget war films.

Related: A Hollywood Military Advisor Explains How Veterans Can Break Into Show Biz »

“I hope to continue that process,” Lurie added. “Mostly, though, I am just damn thrilled to be telling one of the most heroic stories of military survival ever recorded.”

And it might well be. At Combat Outpost Keating, an exposed camp at the base of three mountains in Afghanistan’s Nuristan province not far from the Pakistan border, a handful of soldiers with Bravo Troop, 3rd Squadron, 61st Cavalry Regiment of the 4th Infantry Division, fended off an attack by more than 300 Taliban fighters.

The desperate battle resulted in two Medals of Honor, 27 Purple Hearts, 37 Army Commendation Medals for valor, 18 Bronze Stars with “V,” and nine Silver Stars. As many as 150 enemy fighters were killed, according to Military.com.