“Nothing’s really changed other than we’re not screaming in their faces." 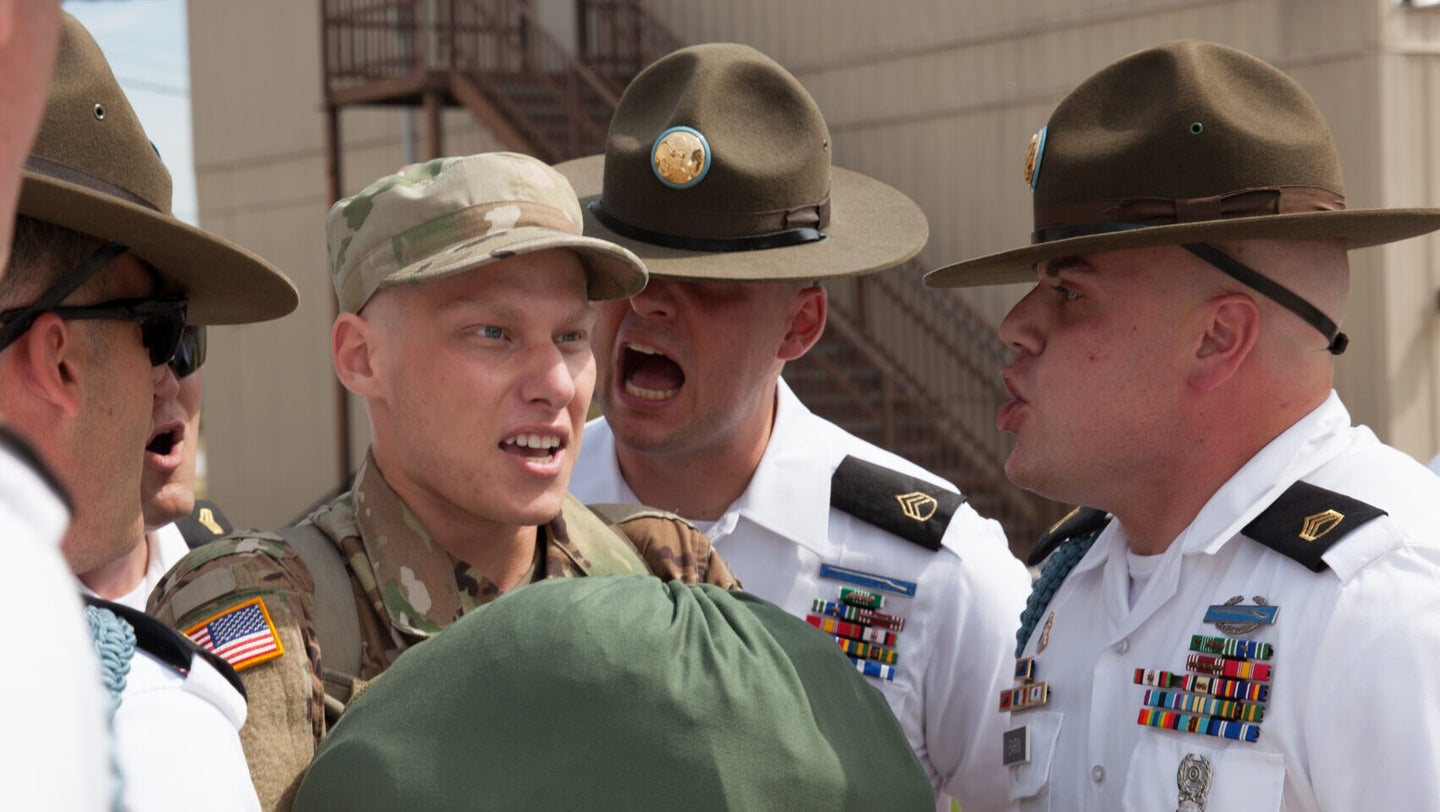 If you’ve observed Army recruits on their first day at basic training in recent years, you may have noticed something a little different: there isn’t quite as much screaming.

It’s been almost two years since the Army announced it was changing the way infantry recruits were greeted at basic training in 2020, moving away from an aggressive and incoherent screaming ‘shark attack’ on trainees  that mostly worked to establish drill sergeants’ dominance.

The Shark Attack was useful during a time in Army history when the service depended on draftees: Wide-eyed drill sergeants used “intimidation and fear to weed out the weak of heart,” according to Command Sgt. Maj. Robert Fortenberry, previously the top enlisted leader of the Infantry School.

But the Army doesn’t use drafted troops anymore. Each soldier getting off that bus signed up to do so, and the Shark Attack betrayed “the innate trust between teammates and worse, betrays the crucial bond of trust with our leaders,” Fortenberry said.

Maj. Gen. Patrick Donahoe, commander of the Maneuver Center of Excellence at Fort Benning, told Task & Purpose that the new event, called The First 100 Yards, helps instill a critical lesson for trainees on day one: trust their noncommissioned officers.

Infantry recruits aren’t the only ones seeing a change in their first day at basic training. The Army also moved Armor recruits away from the shark attack and into an exercise called the “Thunder Run,” which requires trainees to run a set of equipment down a quarter-mile track, handing it off to teammates along the way, and arranging the equipment at the end in the same way it was at the beginning.

“Nothing’s really changed other than we’re not screaming in their faces,” said Command Sgt. Maj. Thomas Yaudas of the 194th Armored Brigade.

At its core, basic training is meant to build the foundation for a soldier’s career, and that includes a trust in their leadership. For example, Donahoe said, the person soldiers are supposed to feel they can go to with a problem is their squad leader — typically a staff sergeant — but soldiers’ “first experience was a staff sergeant ripping their face off as they get off a bus.” It made “no sense,” he said. But now, The First 100 Yards will “hopefully set the model for that relationship between a noncommissioned officer and junior enlisted soldiers as they go up the ranks.”

While it was no doubt a shift for the Army, the new way of doing things seems to be working. Command Sgt. Maj. T.J. Holland, the former top enlisted leader of the 18th Airborne Corps, said in an Army news release that they are seeing “more discipline” and “more physical readiness” from soldiers going through The First 100 Yards.

They’re being shown “right off the bus” how the Army wants them to work together, while also potentially cutting down on immediate injury as soldiers aren’t chaotically scrambling with their things off the bus. It’s about showing them “what right looks like” from the very start, Master Sgt. Adam Breeding of Army Forces Command said last year.

And for any of the “back in my day crowd” who feel the new generation of soldiers couldn’t possibly be as tough as they were because they’re not being chaotically screamed at by drill sergeants, Donahoe invited them to give it a try.

“For the folks who are like, ‘That’s weak’ — first off, they haven’t seen it,” Donahoe said. “They’re just reacting to something they’ve heard. And I welcome any of those guys to come back and get on a bus and go through the First 100 Yards or Thunder Run, and see just how weak and easy it is.”