Mattis: Military DREAMers Should Still Be Protected If DACA Expires

Good news for DREAMers who are in the military or honorably discharged veterans: The Defense Department has your back, even... 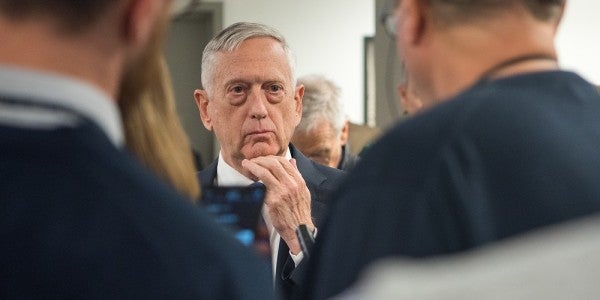 Good news for DREAMers who are in the military or honorably discharged veterans: The Defense Department has your back, even if Congress can’t get its act together.

Currently, about 900 service members who were brought to the United States illegally as children are protected from deportation by the Deferred Action for Childhood Arrivals executive order, Pentagon spokeswoman Dana White said on Thursday.

DACA is set to expire on March 5 and President Donald Trump has told Congress that he wants lawmakers to send him a law on immigration before then. But Democrats and Republicans remain divided on a way forward for immigration, so as of Thursday, chances of lawmakers reaching an agreement on DACA remained slim.

Defense Secretary James Mattis said Thursday that DACA recipients who are on active-duty, waiting to begin military training, in the active reserves, and veterans who received an honorable discharge should continue to be protected from deportation should DACA expire.

The only exceptions would be if service members covered by DACA committed a serious felony or if a federal judge has signed a final order to deport a service member, said Mattis, who added he is not aware that any service members are facing a deportation order.

“This has always been the case,” Mattis told reporters at the Pentagon. “We would always stand by one of our people and I have never found the Department of Homeland Security unwilling to take any call from anyone on my staff if we in fact found somebody, who had been treated unjustly.”

When asked to explain what legal authority would prevent DACA recipients from being deported if the program expires next month, Mattis did not answer directly.

“They’re protected,” he said. “I think that it [DACA] is not coming to an end either. You can sign up right now, as I understand it. Now, I’m not an expert on DACA. I’m an expert on the military.”