This morning, the Today Show introduced the world to Fetch!, a new app to identify your breed of dog. Just... 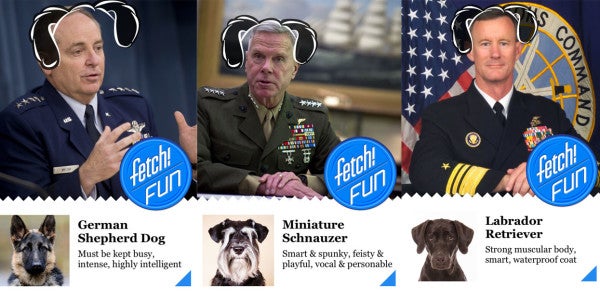 This morning, the Today Show introduced the world to Fetch!, a new app to identify your breed of dog. Just for fun, the app also has a feature that uses facial recognition technology to match humans to a dog breed. Of course, just for fun, we decided to upload the faces of America’s most powerful military leaders. Behold, generals and admirals as lovable canines, man’s best friend. The app even offers descriptions of their attributes, which are strikingly accurate.

McChrystal retired from the Army in 2010 after commanding coalition forces in Afghanistan.

Welsh currently serves as the Air Force Chief of Staff.

McRaven retired in 2014 as commander of U.S. Special Operations Command. The former Navy SEAL was the on-scene commander of the raid that killed Osama bin Laden. He now serves as Chancellor of the University of Texas system.

Amos retired as commandant of the Marine Corps in 2014. He was the first aviator to serve in that post.

Petraeus resigned as director of the Central Intelligence Agency in 2012 after having previously commanded U.S. Central Command and coalition forces in Afghanistan and Iraq.

Neller currently serves as the commandant of the Marine Corps.

Dunford currently serves as the Chairman of the Joint Chiefs of Staff, and previously served as commandant of the Marine Corps and commander of coalition forces in Afghanistan.

Dempsey retired as Chairman of the Joint Chiefs of Staff in 2015.

Allen retired in 2015 as the Special Presidential Envoy for the Global Coalition to Counter ISIL. Prior to that, he served as the commander of coalition forces in Afghanistan between 2011-2013.

Richardson currently serves as the Chief of Naval Operations.

A living legend in the Marine Corps, Mattis retired in 2013 as commander of U.S. Central Command, the unified combatant command responsible for the Middle East, North and East Africa, and Central Asia.