When Col. Chris Hughes, a key spokesman for the Marine Corps, proposed the idea of limiting the visibility and access... 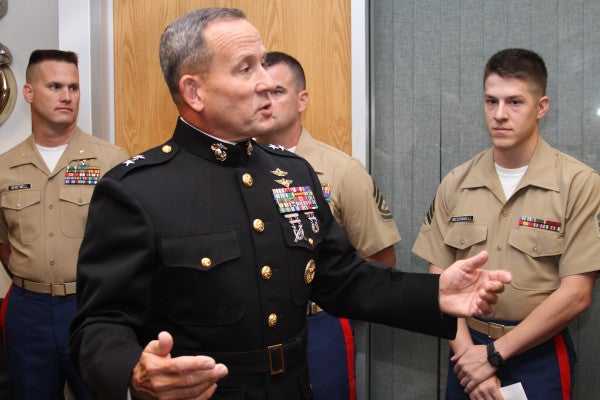 When Col. Chris Hughes, a key spokesman for the Marine Corps, proposed the idea of limiting the visibility and access to the Marine Corps Times in response to their negative coverage of the commandant in an email, it was fairly quickly shot down.

Sheryl Murray, the assistant deputy commandant for Manpower and Reserve Affairs, chatted things over with her boss, Lt. Gen. Robert Milstead, and responded to Hughes' May 15 email within minutes:

“Chris, I just discussed this with Gen. Milstead, and he says, ‘this is the dumbest idea he has ever heard, and he will not entertain it.’”

But somehow, it was Milstead, who initially and viscerally opposed the initiative, who ended up shouldering the blame.

In an interview with Lance Bacon of the Marine Corps Times, Hughes; Col. Sean Gibson; Maj. Shawn Haney, who is Milstead's public affairs officer; and Maj. John Caldwell were asked how this effort to “professionalize” the Marine Corps started, and who was in charge of it.

In December 2013, the deputy commandant for Manpower & Reserve Affairs directed the Semper Fit and Exchange Services Division to determine how to professionalize the front areas of our stores by providing a more polished look. As a result, the store entry merchandising strategy was reviewed and new directives were issued on how and where publications were to be displayed.

This exchange occurred before the Marine Corps Times published emails they obtained implicating Hughes and other member of the Commandant's staff in removing the Marine Corps Times from checkout counters not in an attempt to “professionalize” store fronts, but in an effort to conduct what Hughes described in his email as “some level of ban from our facilities” because Amos “believes he is being misrepresented by them.”

It appears Milstead was willing to accept the blame for banning the Marine Corps Times, and he would have gotten away with it too, if it weren't for the leaked emails.

The situation is still rapidly developing, but the Pentagon's Assistant Press Secretary, Carl Woog, tells Task and Purpose that Secretary of Defense Chuck Hagel still has full faith and confidence in Amos' ability to serve as Commandant of the Marine Corps.