Emails unearthed by the Marine Corps Times reveal that an effort by high ranking Marines to remove the newspaper from... 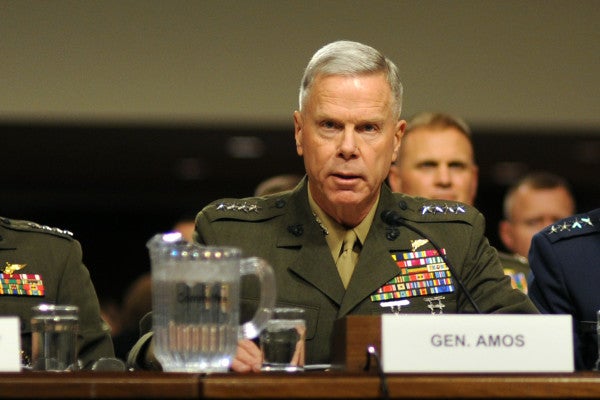 Emails unearthed by the Marine Corps Times reveal that an effort by high ranking Marines to remove the newspaper from newsstands and checkout counters at Marine Corps exchanges was indeed a rebuke of the paper’s critical coverage of the Commandant, Marine Gen. James F. Amos.

The exchange in May of last year occurred between one of Amos' key spokesmen, Col. Chris Hughes; Amos' top civilian attorney, Robert Hogue; and Sheryl Murray, the assistant deputy commandant for Manpower and Reserve Affairs. Brig. Gen. Paul Kennedy, then the director of Marine Corps public affairs, was copied on the email.

We are working a rather tight timeline to respond to CMC on an item. Every couple of years, we have a falling out with Marine Corps Times that warrants consideration of some level of ‘ban’ from our facilities. We believe that we may be close to such an impasse, and we want to present the Commandant with options. We believe it becomes a ‘good order and discipline’ issue if CMC believes he is being misrepresented by them. On such grounds, could he prohibit their sale in our [Marine Corps Community Services] facilities? Or, could he place them somewhere less prominent?

Less than a year later, in December, the Corps announced it was removing the paper from storefronts in an effort to “professionalize.”

The decision made national headlines earlier this month and raised eyebrows from Marines, veterans, members of congress who said the move resembled an attempt to limit the First Amendment protected freedom of the press.

The Corps quickly undid the move, saying that there had been a “clear misunderstanding of intent.”

They were directly asked “Was Marine Corps Times’ removal from the front of the story a response to its sometimes critical coverage of the Corps and specifically the commandant?”

They replied that it was not.

It is wonderful that this interview exists now, and that Hughes, who fired the smoking gun, was on the panel. The entire thing is well worth the read, by my favorite quote comes from Hughes, when he was asked:

“When the decision was made to move Marine Corps Times, was the commandant made aware of it and the details contained therein?”

I’ll jump on that one. You know, the commandant is concerned with, the commandant, let me just gather my thoughts for a second. When he became aware of this issue, he’s the one that directed get the Marine Corps Times back to the front. He understood the impression that this would have with many, and that was certainly not his intent. He wants a holistic look at how we do business. What product is here, immediately available for our Marines and why. And a holistic means, focus groups, discussions, an ongoing process, not just somewhat immediately moving an individual product. And he recognized how this would be perceived and quickly said “my goodness let’s get this back to the front until we can complete a thorough study.”